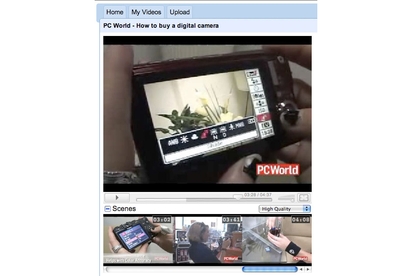 If your business uses Google Docs, and you have ever wished that something similar to YouTube existed for business use, Google Video for Business should suit your needs nicely.

Google brings video into its stable of web apps with Google Video for Business, a new service that permits video sharing among employees. The idea is that anyone at a company — from CEO on down — can post a video, but the content will be accessible only to others at that company. Videos can be shared within a company, but not — say — to your company's ad agency.

Google Video for Business integrates with other Google apps and is part of the Google Apps Premier Edition ($50 per user per year). A version for users working in education will debut next week as part of Google Apps Education Edition, at a cost of $10 per user per year, although a free trial for education customers will run through March 9, 2009.

Recasting video as a business tool

Video can play a useful role in business. A executive might use it to deliver news of the company's new strategy. A tech support employee might use it to post an instructional video on how to solve a problem with the company's email client. In addition, video can help a company share its creative assets with far-flung employees.

To access Google Video for Business, users must first sign in. Videos can be viewed only by people who are invited to do so by the original uploader. You can invite any person who has a valid company e-mail address.

Google Video for Business is configured much like Google Video and other video sharing sites. The page, which is dominated by a search field, carries a listing of videos that are available for viewing from your account, along with a way to upload your own.

Uploading videos is easy. Google Video for Business supports many common video formats, including QuickTime, Windows Media, and Mpeg. You can tag videos as you upload them; or people watching your videos can tag them as they view them. Another boon: you can give coworkers the ability to download videos to their hard drive.

Google Video for Business includes a bookmarking feature of sorts: Google Video analyses the video itself and picks points where it finds scene changes; then it places those points in a scrolling list along the bottom of the video page. Unfortunately, you can't create your own bookmarks, however.

One notable feature: you can embed videos hosted on Google Video for Business into a Web page or into anything that accepts Google Gadgets — including iGoogle and Google Docs spreadsheets. One possible use for this would be to embed an explanatory video into a spreadsheet to help users make better sense of a confusing chart.

If for some reason a user has access to the Web page or to the Google Docs spreadsheet but is not authorised to watch the embedded video, the video simply does not load. We found that feature confusing in the pre-launch version of Google Video for Business that we used. A message telling users what is going on would be helpful.