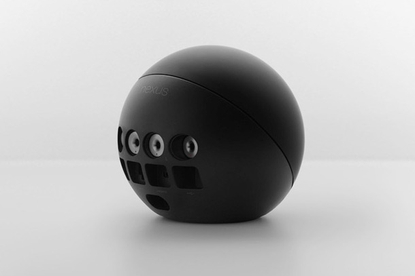 Google's Nexus Q hinges on sharing and collaborating to build music and video playlists with your friends -- it's a 'social' media streamer.

The Nexus Q is a new, orb-shaped media streaming device from Google, just announced before the Google I/O conference. The Nexus Q is, according to Google, "the first social streaming media player".

The Google Nexus Q partners with an Android smartphone or tablet, and can stream music and videos from the Google Play store to a TV and sound system. Its killer feature is that you and your friends (using Android devices) can team up to create playlists of music and video clips on the fly.

The new media streamer, which hasn't been announced for Australia — we've only just got the first generation of Google TV products here in the form of the Sony Internet TV Player — can also power a pair of speakers, positioning it as a Frankeinstein's Media Streamer cobbled together from the innards of the Apple TV and Sonos Play:5.

Like the Sonos system, you can have multiple Google Nexus Q players synced in different rooms of your house, playing music and video clips from a single source.

The Google Nexus Q runs an OMAP4460 processor based on the 1.5GHz dual-core ARM Cortex-A9 — this is a processor that can handle 1080p Full HD video streaming without consuming as much power as a PC or Blu-ray player. It's got 16GB of on-board memory for apps, 1GB of RAM, built-in Wi-Fi and runs Android 4.0 Ice Cream Sandwich: broadly similar specs to the Samsung-Google Nexus smartphone from 2011.

Update: Google has told Good Gear Guide that there are "no plans for the Q in Australia at this stage."