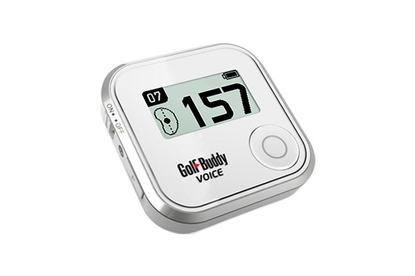 For golfing enthusiasts, the GolfBuddy Voice is a nifty little GPS rangefinder that incorporates audio readouts. It has a very large number of course and hole information from all over the world built into it, with no additional costs, and it even managed to find the little public course that we tested it on.

The Golf Buddy Voice is a GPS that's designed strictly for serious golfers. It's a tiny unit that has about 1000 Australian courses built in to it, and over 35000 from all over the world. These courses are provided for free and there are no subscription or course download charges.

It's a lightweight, 45mm square unit that can be clipped to a piece of clothing and it has a monochrome display with a corner light for aiding visibility. When you switch it on, it will first obtain a GPS signal, which can take a while depending on your location. In our tests, it took up to 90sec, but the quickest was around 35sec. It then identifies the course you are, which hole you are near, and proceeds to command you to get to the tee-off point.

We were a little sceptical of the unit finding the public course that we used for our tests, but the Golf Buddy did indeed have it and it also correctly identified the number of the hole we were on as well as the par — without any user intervention. Manual hole selection is supported, too. When positioned at the tee box, the unit can give you the distance to the green, be it the centre (which is the default), rear or front of the green (you can change by holding down the main button), and the distance can be read out to you when you press the main button on the device once.

It measures the distance in yards by default, but it can be changed to metres. It appeared to be accurate in our tests, with the distance reading changing according to how far we stepped towards and away from the green. The view on the diagram of the green on the screen can rotate depending on your approach.

A female voice is used for the audible readouts and it's a little too mechanical in its flow — similar to Sydney's City Rail train station announcements, but not as clear. Sometimes we found ourselves pressing the button multiple times to hear the readout properly. If you are on a hole that is near a roadway, for example, then you might have trouble hearing the voice unless you place the unit near your ear. There is a volume control on the side, but even at the maximum setting, it might be hard to hear the voice unless there is very little noise (either from vehicles or wind) on your course.

In its most basic form, the Golf Buddy Voice is purely a range finder that tells you how far away you are from the hole. It can also be used to measure shot distance from the hitting point to the landing point once you find your ball.

All up, it's a simple device to use, and it does the job it's designed for, which is to offer a verbal readout of how far away you are from the green. The voice feature is said to be a first for a golf GPS, but it can sometimes be hard to hear, even at the maximum volume setting, which can be remedied by just reading the screen, or holding the unit up to your ear. Perhaps a jack for a set of headphones (or even Bluetooth) might be a good idea for the next version.

Battery life is rated at eight hours by the manufacturer and the unit can be charged via micro-USB. It only weighs 30 grams.