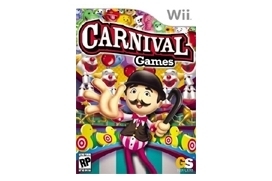 Carnival Games may look cute, but it doesn't translate into gameplay you'll come back to, and in the end, is just a novelty Wii game that wears out it's welcome way too fast to be worth any price.

You can go to a real carnival or buy one for your Wii in the form of Carnival Games, but you'll be ripped off either way, so why not at least get the fresh, funnel cake-scented air?

But Where Are the Deep Fried Twinkies?

Carnival Games groups 25 mini-games in sets of Alleys, but for our purposes it's probably easier to discuss them according to their accompanying Wii Remote movement. An underhand swing is used for Alley Ball (reminiscent of, but legally distinct from Skee Ball), tossing softballs into Buckets of Fun (or anti-fun...), and Lucky Cups (aptly named--the game is 100 per cent luck).

Overhand throws are used for shooting Hoops, chucking balls at the Dunk Tank target, or bringing down the hammer in Test Your Strength. Other times you'll be using dart-throwing motions to pop balloons, straight up aiming techniques for shooting ducks, or the more obscure joystick-style and ball-rolling moves. You can't say they didn't mix it up, it's just that it's honestly not that much fun.

Before you start you'll need to create a character. No Miis here, but there are a fair amount of expressions and outfits to choose from. Once you start winning tickets you can trade them in for extra costume options, but wearing flippers, an army helmet and a clown nose doesn't make the game itself any better. Incidentally, the tickets can also be used to play "Alley Games", which are mostly in the vein of waste-of-time fortune tellers, but also include Going Nuts, in which you catch falling orbs containing tickets by moving around a little squirrel at the bottom of a tree, though your ticket count is unlikely to ever break even.

Playing by yourself in Prize Mode is mostly pointless; you win a number of depending on what size prize you win: small, medium or large. Interestingly, if you are really bad at this game you can still win jumbo prizes because of the way you can trade small prizes in for mediums, mediums in for larges, and so on. The question is, should you bother to develop a good strategy to go for the large prizes, or just decide there are other games more worthy of your time? Similar to costume upgrades, no amount of giant stuffed animals, musical instruments, or miniature vehicles--even if they rotate at the press of the A button--will make throwing coins at a plate or spraying water at a virtual clown's face any more exciting.

At this point you can move onto multiplayer (with a slightly limited but nonetheless convenient hot seat option), or you can mercifully spare your friends.