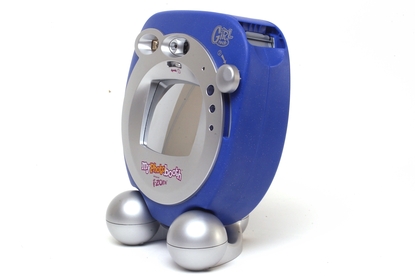 The Photo Booth takes poor quality pictures, but it should still provide enough fun for the kids.

The Girl Tech Photo Booth is a novelty device that allows users to take instant Polaroid photos just like a real photo booth - but the image quality does leave something to be desired.

The Photo Booth is essentially a small, boxed shape gadget, with a large mirror on the front and a flash and camera lens positioned above it. The Photo Booth allows you to look into the mirror and then quickly take an instant photo via the supplied i-Zone Polaroid film. The Photo Booth is adjustable via moving the casing forward or backwards from its base, so you can take pictures from varying angles.

The film is loaded into the top of the device, which is opened via a small slider button on the left hand side of the booth. Taking a photo is a simple matter of sliding down the large handle on the front of the device, which activates a timer to allow users time to pose for their photo. Once the shot is taken, the film is removed from the top right hand corner of the device. We didn't like the force that was needed to remove the film, especially as this device is aimed at children and this may cause problems for some.

The quality of photos was largely disappointing and most of the shots we took were affected by what seemed like light entering the film. We checked to make sure the film lid was properly sealed and closed, but as this was the case, we can only assume that there is a fault in the design which allows excessive light onto the pictures.

Another disappointing factor about the Photo Booth is the image alignment, which did cause us some problems. When we took photos with our head directly in the centre of the mirror, our images weren't properly aligned and in most cases, were cut off, leaving half a head. With the iZone film pretty expensive, there will be plenty of frustrated kids using the Photo Booth.

Aside from these issues, the Photo Booth is an average product which will keep the kids occupied for a few hours at least. The pictures it snaps aren't anything to write home about, but it is a toy and perhaps parents can get away with not buying digital cameras for their 5 year olds just yet.