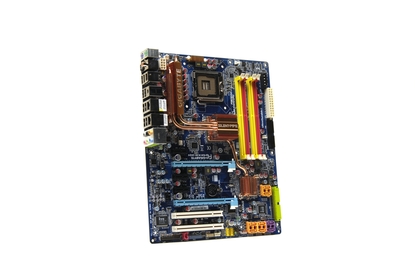 Gigabyte's X38-DQ6 is very well built, has very good connectivity options and was stable in our tests. It still supports DDR2 RAM, and it will be able to handle 45-nanometre CPUs as soon as they are released. If you're after a high-end board, it's definitely worth a look.

Gigabyte's GA-X38-DQ6 motherboard is for forward-thinking enthusiasts who want a board that's capable of running Intel's current and next-generation CPUs.

Gigabyte has gone all-out in the production of this board. It has used electrical components that are more efficient at delivering power to the CPU (and which also run cooler), and it has implemented a new surface-mount technology for the capacitors, which rids the underside of the board of many sharp solder joints (there are still a few, however). The chipset and the electrical components around the CPU are cooled by heat sinks, which are joined by heat-pipes. The surface temperature of the heat sinks reached 41 degrees Celsius while the PC was under a full processing load. This silent cooling method, along with an effective dynamic CPU fan controller, makes the X38-DQ6 a very quiet board, even when it's under a full processing load.

The X38-DQ6 is based on Intel's high-end X38 chipset, which is the latest in Intel's 3-series of chipsets (Q35, P35, P31, G35, G33 and G31 being the mainstream ones). The X38 replaces the 975X chipset in Intel's performance chipset line-up. The main advantages of the X38 are its support for the PCI Express 2.0 standard and 1600MHz front side bus speed. Gigabyte has chosen to pair this chipset with DDR2 memory slots, despite it being optimised for DDR3 memory, which means users will be able to use their existing DDR2 modules, instead of switching to the more expensive DDR3.

The board will run today's 65-nanometre, high-end Core 2 Extreme QX6850 CPU, but it will also be capable of running 45-nanometre, Core 2 CPUs when they're released, too. The BIOS will support front side bus speeds up to 1600MHz, which will be a requirement of the new CPUs, and it can run the DDR2 memory speed independently of the front side bus speed, so overclocking with slow RAM can still be undertaken with stable results. The board officially supports DDR2 RAM speeds of 1066MHz, 800MHz and 667MHz.

In our tests, we used two 800MHz-rated, 512MB DDR2 modules from Corsair, which we ran at 800MHz, while the front side bus (FSB) of the board ran at 1333MHz (the native FSB speed of the CPU). WorldBench 6 recorded a score of 110 with this configuration, which is three points faster than what a Gigabyte board based on the P35 chipset achieved with the same configuration.

In the iTunes encoding test (53min worth of WAV files to 56Kbps MP3s), the board recorded a time of 42sec, while in the Cdex test (to 192Kbps MP3 files) it recorded 1min 30sec. When we overclocked the CPU to 3.6GHz, the times fell to 34sec and 1min 14sec, respectively. To test the board's stability at 3.6GHz, we ran the Adobe Photoshop CS2 test from the WorldBench suite; its time improved from 409sec to 363sec.

Almost every type of conceivable connectivity option is present on this board. It has high-definition audio support for Blu-ray and HD-DVD movies, it ships with four eSATA ports (accessible via rear-mounted brackets) and two gigabit Ethernet ports. Because it implements the PCI Express 2.0 standard, it also supports ATI CrossFire graphics card configurations with both slots running at PCIe x16 speeds. (However, only cards based on the PCI Express 2.0 standard will run at this speed).