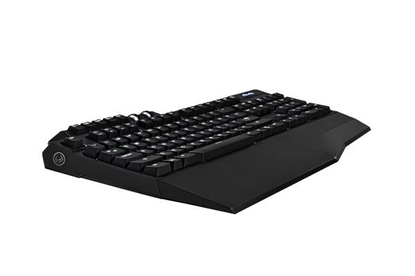 The Aivia Osmium is a great mechanical keyboard that works well during gameplay. However, a few small design niggles keep it from being perfect.

As Gigabyte demonstrated with the Aivia Krypton gaming mouse, it is keen to get a foothold in the gaming space with its premium range of peripherals. Acting as a companion to the mouse, Gigabyte’s Aivia Osmium is a mechanical keyboard aimed at gaming. While the mouse was seemingly named in homage to Superman’s home planet, the keyboard is named after the blue Platinum group metal Osmium. It is the heaviest element found at normal conditions, which is supposed to represent the tough durability and premium nation of the gaming keyboard.

Thin wireless keyboards popularised by all-in-one desktops such as the iMac may be the popular choice for consumers these days, but the reality is that these keyboards are not that practical when played with games. Gigabyte's keyboard has a cord that plugs into a USB port on your computer, and it's a mechanical keyboard.

Although mechanical keyboards are considered a bit old fashioned in the consumer space, anyone serious about gaming will use one for playing. The reason for this is the feel of the keys, which require the right amount of force to be pressed down. The Osmium is fitted with Cherry MX mechanical key-switches, which sport a reduced key actuation distance of 2mm.

The keyboard we tested has the Brown type of switches which comes with a tactile stroke, which translates in the force briefly increasing halfway in the travel to indicate that the key had been pressed. In other words, it results in a click feel without the associated sound. The switches have also been designed where only 60 grams of force is needed and actuation takes 45 grams.

By going with the Brown switches, it makes the Osmium a good all-purposes keyboard for people who do a lot of typing on their computer in addition to gaming. The keys have a smooth, matte finish and they are comfortable to touch with the tip of the fingers. However, the small resistance when pressing keys may affect gamers who want to do rapid fire key presses. Fortunately, the Osmium comes in variety of switch types, letting the user chose the one that is most comfortable.

Mechanical keyboards are traditionally known for their loud clattering, but Gigabyte has managed to design the Osmium so that it operates reasonably quietly during use. The Brown switches that have been used are not as loud as many of the 'clicky' types of mechanical switches that are available. That doesn't mean that the keyboard is completely silent, as keystrokes do still create noise, though it is significantly less than other mechanical keyboards on the market.

We tested the Osmium with StarCraft II: Heart of the Swarm, which makes heavy use of hotkeys and shortcuts during gameplay. The keyboard performed well during tense battles and orders to units were issued without incident. A keyboard is heavily used in first person shooters, so we also tested the Osmium with the recently released Far Cry 3: Blood Dragon, as well as with an older title, Crysis Warhead, for comparison. The placement and feel of the keys made navigation during fire fights a breeze, with the smooth surface of the keys making it easy for fingers to travel during strokes. The only minor niggle is that the scrolling wheels that control the backlight brightness and audio volume felt a bit loose and flimsy, particularly when the volume was shifted on the fly.

Backlighting and other features

Every key on the keyboard, even the added function keys, are lit by a dedicated white LED. The scroll wheels even have lights of their own, including the Aivia logo in the upper right corner of the keyboard. The brightness of the LEDs can be controlled, however this does not extend to the logo and Num, Caps, and Scroll Lock indicators, which remain the same brightness regardless of what is chosen for the keyboard. However, the colour of the logo can be changed to several preset colours, and it can be set to either stay lit all the time or to pulse.

The keyboard is designed to withstand long periods of gaming, supporting 64 simultaneous key presses over a USB connection and it has an estimated 50 million key-press lifespan. Gigabyte predicts this to be 10 times the amount of conventional keyboards, and the robust build of the keys and frame of the Osmium seem to back this up. As with the Krypton mouse, the Osmium comes with Gigabyte’s GHOST Macro software to allow players to set custom profiles for macro keys and switch between them depending on the game being played. The software allows five unique profiles to be switched, with the ability to store up to 70 macros.

In addition to a handy headphone and microphone plug on the side of the keyboard, there is also a built-in USB 3.0 port — it's nice to see that Gigabyte has included a fast port on the keyboard for easy connection of other peripherals. This feature is often absent from modern keyboards, even those aimed at consumers who could benefit from the convenient placement of the port.