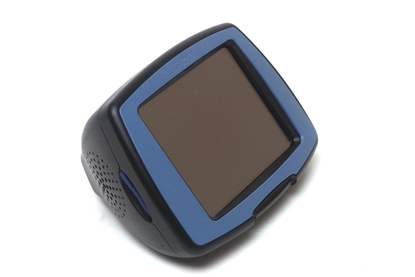 The GARMIN StreetPilot is a reliable and easy-to-use GPS unit.

Those on the lookout for a reliable GPS unit with an easy-to-use interface need look no further than the GARMIN StreetPilot c320. The c320 is designed for using your fingers on the LCD touchscreen--no fiddly stylus input here. With its large buttons, icons and street names, we found the c320 incredibly straightforward to operate, and beginners would experience no difficulties in navigating the brightly coloured interface. Designed solely for in-car use, the bulky wedge shape of the c320 contrasts to the sleeker models such as Mio 136. But what it lacks in aesthetics, this device makes up for in reliability and simplicity.

On our test drives, the c320 acquired satellites relatively fast (but not as fast as the Mio 268) and had no problems generating routes using V6 of the City Navigator Australia software. The installed software could not have been easier to use.

When powered up, users are presented with just two options: setting the destination or viewing the map. A destination can be an address, a favourite location, a recently access location or a point of interest (POIs). Unlike many other units, the c320 provides dedicated buttons for POIs such as restaurants, petrol stations, parking and shops. Users can also manually scroll through the map and select a destination on the map itself.

To enter a destination manually, uses first select a state, then a suburb and then (strangely) a street number and lastly street name. To enter destination data, an onscreen keyboard is displayed and users enter data with their fingers. As you type, if the c320 finds a matching suburb, street or state it is immediately displayed on-screen, meaning you rarely have to type the full name of the destination.

An option we liked was the ability to set up Home as a fixed destination. From the map screen, a few clicks were all that was necessary for the c320 to calculate a route to the preset home from wherever you are currently. Another feature we found useful was the Trip Computer. Displayed like a car dashboard, this shows you information such the total time of travelling, the moving time, stopped time and average speed.

The map interface on this device was clear, precise and easy to understand. On the bottom left-hand side of the screen, the estimated time of arrival is shown, along with the distance to the next turn. The driving instructions are displayed at the top of the unit in large text, and pressing on this displays the complete list of directions to the destination.

One criticism of the routing is that it uses voice notifications such as 'proceed north west' or 'proceed east'. The Mio units we have tested display arrows and visual notifications, which make it clearer in which direction to proceed and which way to turn. We found that approach much clearer than compass directions.

While we liked the 3.5", 320 x 240 LCD, we did find the surface to be highly reflective, which posed a problem in direct sunlight. The map on the c320 can be set to day or night mode and can be viewed in either 2D or 3D formats.

The sound quality on the c320 was crystal clear through the two speakers positioned on either side of the unit. Users can choose the language of the voice notifications and also the accent--for example, American English or British English. Every voice notification is preceded by an attention tone (which can be turned off) that sounds like a soft chime. We found that when a speed camera or red light camera was detected, the unit would sound the attention tone but no voice notification was provided. Additionally, the c320 did not warn us when we exceeded the speed limit.

While the c320 scores highly in terms of ease of use, it lacks the more advanced GPS features found in the Mio DigiWalker range, such as previewing routes, moving the map around on-screen and customising warnings, alerts and distances. Options that can be customised include the level of map detail, colour modes and routing algorithms. Users can also set the c320 to avoid roads such as highway, toll roads and unpaved roads.

With an integrated charger built into the car mount, charging the unit on the road wouldn't be a problem. Users should be aware that when placed on the car mount, the GARMIN turns off its internal battery and switches to the car power. So if the car is turned off, the unit gives you 30 seconds to manually switch back to its internal battery or it switches itself off.