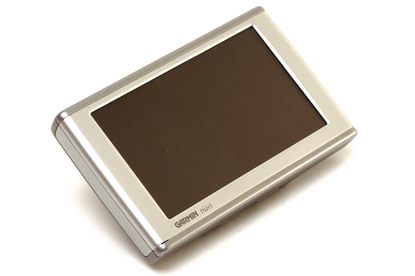 The nuvi 660 adds a larger display and Bluetooth hands-free calling to an already solid previous unit, but some small deficiencies still remain. Best of all though, the pricing difference between models is minimal, so the 660 is definitely worth the extra money.

An upgrade to the smaller nuvi 300, Garmin's new nuvi 660 adds a larger touch screen and Bluetooth hands-free calling to an already solid package, making it quite an attractive GPS unit.

Garmin continues to impress with their user interface and the nuvi 660 is no exception; it's simple, bright and extremely effective. Menu icons are accompanied by large, colourful boxes, while more specific sections, such as the address search, are clearly labelled with large text. The display is adequate, although not as bright as some other models on the market. Sunlight glare can be a significant problem; on a bright summer day, we struggled to see the screen, and the poor viewing angle didn't make things any easier.

The nuvi 660 software is intuitive to use. Street names are filtered by suburb, reducing the list of streets during searching to a manageable number. Unfortunately, searches must be done in order of suburb, street number and then street name: the street number would be better positioned as an option after you select the street.

The main menu is very simple, with icons for Where To, View Map and Travel Kit. Here you can also adjust settings such as brightness and volume levels. Tapping the 'Where To?' button allows you to navigate to a specific address, a food outlet, accommodation within 5km of the current location, saved locations (including favourites and recent selections) and even the nearest petrol station. You can also find intersections, attractions, shopping centres, parking, entertainment and recreation, hospitals, airports and auto services using the nuvi 660. Furthermore, a specific GPS coordinate can be entered to which the unit can navigate.

While the general navigational experience of the nuvi 660 is enjoyable, we did notice that the time to find and maintain a GPS signal is a little slower than some other units. At one stage the nuvi 660 took about two minutes to find a signal, despite clear skies. It uses the popular SiRF Star III GPS chipset seen in many other units currently on the market, so it was disappointing that it took longer than normal to find and maintain a clear signal. Re-routing times were also a mixed bag; they were fine most of the time, but at some stages took longer than we would have liked.

Voice commands were average; they did the job quite well, but the speech just didn't sound as natural as that on some of the newer TomTom or Navman units. Furthermore, when changing the voice options (English has two options - American or British), you can't listen to a sample before selecting it. On the up side though, the nuvi 660 is extremely loud at its highest setting, so you shouldn't have any problems hearing the instructions, despite the speaker being located on the rear of the unit.

The nuvi 660 maps are simple and fairly easy to read and can be zoomed in and out of easily using the large + and - controls on the touch screen. You can select either a 3D or 2D view, with the map oriented with either north up or track up (the direction you are going facing upwards). Tapping the speed button on the map brings up a small trip computer, which displays data about your trip, including overall average speed, max speed, total time and moving time, amongst others. The nuvi 660 uses WhereIs maps in Australia and these are preloaded onto the unit. For extra maps, an SD card slot is located on the right hand side of the unit, alongside a mini-USB port for charging and connecting to a PC (for transferring MP3 files), and a standard 3.5mm headphone jack.

Bluetooth hands free calling is also available on the nuvi 660 and this is a simple and easy to use feature. Users pair a mobile phone to the unit via the Bluetooth settings menu. We had no issues pairing our phone and were up and running in just a few seconds. Once connected, you can browse your entire phone book on the nuvi, even if your contacts are stored on the SIM card rather than in the phones memory. You can also dial a phone number using a large on screen keyboard, review last dialed, last received and missed call lists, call your default home number (which can be changed in the settings menu) and check your phone status, such as battery life and reception quality.

Like the nuvi 300, the nuvi 660 also offers a variety of tools for long journeys. These include an MP3 player with 200MB of space (although this can be expanded using the SD card slot), audio book player from audible.com, a picture viewer, world travel clock with time zones, currency converter, measurement converter and calculator. In addition, optional packages including a language guide and travel guide are sold separately on SD cards. The MP3 player is fairly basic with only repeat and random play options and no equaliser, but it is simple to use thanks to large, easy to tap controls on the touch screen. There is even a section in the top right hand corner for album art, as well as ID3 tag information in the left corner. While these features won't be for everyone, they could be a nice addition for those on a budget who want a multifunction device in their car.

The nuvi 660, like the nuvi 300 remains a compact device, despite possessing a larger display. It measures 124mm x 74mm x 23mm and weighs 190g. Although it doesn't function as a PDA, the nuvi 660 will still easily slip into any pocket or bag without weighing you down. The nuvi 660 includes just one button on its exterior (a power key); there are no external volume controls. Instead, you'll have to navigate away from the map screen to the menu and adjust volume from the quick settings. Our main complaint with the nuvi 300 was the window mount. Thankfully, the nuvi 660 didn't experience any of the same problems, sticking easily and firmly throughout our journeys. Our only concern was with the charger on the window mount bracket - it uses a proprietary connection, rather than the standard mini-USB plug on the nuvi 660 itself.

Battery life is rated between three and seven hours by Garmin, depending on usage. On average, we experienced between four and five hours, which is a fair result. For charging, Garmin includes both an AC charger and an in-car charger in the sales package. Overall, for an extra $100 RRP, the nuvi 660 offers a larger screen and Bluetooth hands-free calling over its little brother, the nuvi 300; we definitely think this is worth the extra cash.