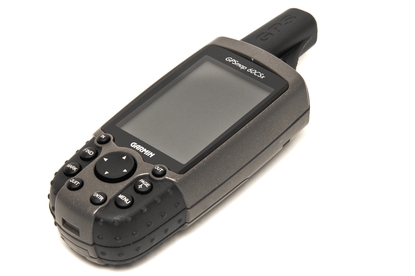 The GPSmap 60CSx has all the hallmarks of a decent handheld GPS device. However, it still offers too little at too high a price.

Garmin’s GPSmap 60CSx has a colour screen, electronic compass, barometric altimeter and expandable memory. Although these features are certainly useful, they attract a $260 premium over the already expensive GPSmap 60, a price which places the device far and beyond the likes of the Magellan Triton 2000 or even Garmin’s own Oregon 200.

The GPSmap 60CSx has a U-shaped eight button layout, an omnidirectional navigational pad and an external antenna. Physically, the only difference between this and other GPS 60 series devices is the dark grey casing, which is still built to the IPX-7 standard for water and shock-proofing.

The GPSmap 60CSx distinguishes itself from its less expensive counterparts with a colour screen. The same familiar interface remains though, so it won’t revolutionise the way you use the menus or the device’s supplementary functions. The device’s maps receive the greatest benefit from the new display, the colour interface making navigation much easier and bearable during regular use. Of course, the colour remains fairly low-res at 256 colour depth, but this is more than enough for standard navigation.

Expandable memory is another distinguishing feature of the GPSmap 60CSx. The GPSmap 60CSx utilises a microSD card slot instead of internal memory for storage, allowing users to change maps much more easily. The 24MB found in the GPSmap 60 is only enough for the integrated base map with sparse detail — the inclusion of a microSD slot on the GPSmap 60CSx allows the user to purchase and use much more detailed city street, topographical and marine maps at an extra cost.

The device’s unspecified GPS receiver is WAAS-enabled for accuracy within 5m, but this doesn’t aid cold acquisition, which can often take more than three minutes.

The 60CSx’s control scheme takes some getting used to for handheld GPS novices. The omnidirectional pad is easy to use and beneficial while navigating through maps, but many of the other buttons are fairly context sensitive, so it’ll take some time to know which buttons work where. Novice users might be more at home with the control schemes of units in Garmin’s Colorado or Oregon ranges.

Thankfully, the combination of colour screen and expandable memory gives purpose to the device’s Highway mode. The GPSmap 60CSx’s base map still hinders this function, but with one of the optional microSD cards installed, the Highway mode becomes a 3D view for the active route. This is still no replacement for automotive GPS devices — and it doesn’t intend to do so. With the device’s on-road navigation turned on, Highway mode super-imposes the user’s active route on top of both highways and any side roads that the user must travel on. Although experienced bushwalkers are sure to favour standard 2D maps, Highway mode provides an extra method of finding one’s own bearings.

The colour screen and expandable memory are positive features but they come at an unacceptable price. The barometric altimeter and electronic compass — useful tools for experienced hikers — are the only distinguishing factor between the GPSmap 60CSx and the $699 GPSmap 60Cx, a full $100 difference for two functions. Unless you particularly like the look of this device, stick to the cheaper models.