Oregon 300 without the touch screen 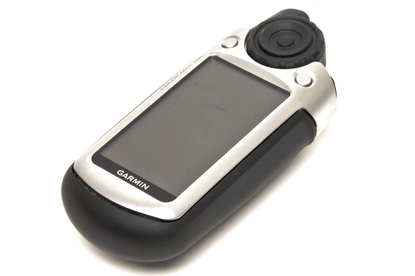 The Colorado 300 provides a slightly cheaper, non-touch-screen alternative to the Oregon 300. With both models proving good combination automotive/handheld GPS devices, the decision largely comes down to your preferred control scheme.

Garmin’s Colorado 300 is a versatile GPS device. It shares some of the problems of the Oregon range, but it has a better screen as well as an unusual control scheme.

The device has a two-tone grey and black case that is mainly made of plastic and rubber. Garmin says the case is built to IPX-7 standards to make it waterproof, but it isn’t as weather resistant as we would have hoped. The rubber backing doesn’t form the tightest seal with the surrounding plastic, allowing fine sand granules to enter the casing around the SD card slot during testing. We were critical of the placement of the microSD card slot on the Oregon 300, but we actually prefer the extra protection that it provides over the relatively unprotected card slot of the Colorado 300.

The Colorado 300 has two quick access buttons and a multi-functional rotary dial; an unorthodox system but one that has its merits. The rotary dial is tied to the unit’s configurable shortcuts menu. Because the Colorado 300 lacks the touch screen of its Oregon range counterparts, it also lacks the misty protective layer on its display. As a result, the Colorado’s display is of a much higher quality and can be easily viewed in direct sunlight.

By spinning the rotary dial with your thumb, you can easily zoom in and out of maps. Pressing and holding a direction on the pad shifts the display’s focus away from the user’s current position, enabling you to view different portions of the map.

Like the Oregon 300, the Colorado 300 uses a worldwide base map with Digital Elevation Model (DEM) relief mapping for basic topographical information. The unit also provides a 3-D view for more conventional automotive GPS navigation, though this function is useless without the optional street maps.

Configurable profiles have largely been a gimmick in other handheld GPS devices, allowing only insignificant changes between profiles. The Colorado 300, however, implements the best use of configurable profiles we’ve seen, essentially altering the unit’s functions according to which profile is chosen. Choose the recreational profile and the unit has a shortcut contextual menu that allows quick access from the rotary dial. The automotive profile, on the other hand, treats the right quick access button as a page button, adds a 3-D view and has an interface similar to automotive GPS devices. This feature allows the Colorado 300 to act as a true automotive/handheld GPS combination.

Like the Oregon models, the Colorado 300 allows for wireless sharing between devices. Garmin doesn’t specify which wireless protocol is used, but the device will automatically search out compatible models (currently limited to the Colorado 300 and Oregon 300 and 400) and allow users to share waypoints, tracks, routes and geocaches. The process is painless, and the function will be useful in situations involving a group of trekkers with more than one GPS device.