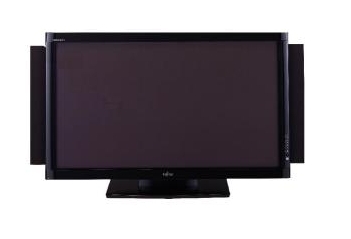 The Fujitsu PlasmaVision P42XHA58EB is a great unit capable of delivering reasonable high definition images while also being able to convincingly display standard definition as well.

The Fujitsu PlasmaVision P42XHA58EB is a 42in plasma display panel with a native resolution of 1024 x 768. This is the little brother to the P50XHA58EB but it is not the same television by a long shot. This panel received different results than the 50in version, with most problems stemming from the lower horizontal resolution. In our standard and high definition tests, the unit performed well with minor faults but in PC mode we detected no problems at all. Like the 50in, calibration options for this panel are exceptional with a high level of detail and incredible amount of control being offered to the end-user.

To test the high definition capabilities of this unit we ran a number of tests at 720p and 1080i. To test gaming, we connected an Xbox 360 at 720p and ran Tony Hawk's Project 8 and Ghost Recon Advanced Warfighter 2. The image quality was excellent but we did notice some vertical pixilation, especially on curved surfaces and diagonal lines. However, there were no image noise or contrast problems and the level of detail was excellent. The unit handled motion well with no ghosting and fine details like dust particles were nicely rendered. At default settings, there was a moderate level of over-sharpening but we were able to remove it with calibration.

At 1080i, we viewed the Empire State Building finale from the HD-DVD version of King Kong and were impressed with the result. There was no noise in the background clouds in of the scene, colours were accurate and the level of detail, particularly in Kong's fur, was excellent too. Skin tones were also impeccably reproduced with no contrast stepping at all but the vertical pixilation problem was seen here as well, especially the edges of the building.

For our final high definition test, we ran the HD-DVD high definition edition of Digital Video Essentials at 720p resolution. We found whites to be bright and pure with rich blacks and flawless colour. The grayscale tests were all rendered without discolouration with an excellent blend along the grayscale ramp. There were no problems in any of the resolution tests and the geometry tests were displayed without error.

While its not quite as good as the 50in version, this unit still delivers good images, just with a few problems. This unit would have been much better at 1366 x 768 resolution as the dot pitch is a little too high and some slight fly-screen effect can be seen at times. Of course, if you sit back at a comfortable distance, it diminishes the effect greatly.

We viewed the lobby scene from The Matrix on DVD for the first of our standard definition tests. There very little scaling artifacts or noise and no background discolouration on background textures. However the pixilation could be seen in these tests too at moderate levels especially on characters clothes. For our second test we used the standard definition DVD edition of Digital Video Essentials. Surprisingly, the results were on-par with its HD brethren and we once again found no problems in any of the tests. Even though the panel needs to scale the images to the native resolution, there was still no noise in any of the greyscale tests and no problems in any of the colour tests.

Something that makes this panel a little special is its extensive list of calibration options. The on-screen menus are easy to understand and simple to navigate. While some of the options are very basic, there are some image-tweaking tools that we've never seen before, yet always wished were available to us. You can calibrate the RGB colour levels separately, or you can target one of seven specific colour elements (red, green, blue, magenta, cyan, yellow and white) and then tweak the RGB intensities within that colour. There are also various noise reduction modes and two types of contrast controls (an extra one for the signal). While some of you may never use these options, we're nonetheless glad to see them included. Whether you have the know-how or you enlist the help of a technician, these features will give you complete control over the image quality, to an extent that we have never seen on a plasma panel before.

Plasma panels rarely work flawlessly via PC connections and, with this consideration in mind, we ran tests using DisplayMate Video Edition. We expected some aberrations when testing the P42XHA58EB, but found very few. We ran the tests at a resolution of 1024 x 768 since it is the native resolution of the panel. The advantage of running in the native resolution is that we avoided any banding in the resolution tests. The rest of the tests were delivered flawlessly and the desktop looked great with no over-sharpening on text or desktop icons. If you're a media centre PC user, you'll no doubt be happy with this model.

The PlasmaVision range comes in two different colours - black or silver. We reviewed the black edition. The unit is attractive with a piano-black bezel, rounded edges and black gloss stand. The rear inputs are fiddly and require a little persistence, but the range of high definition inputs makes up for the inconvenience. The P42XHA58EB has two HDMI and two Component connections for HD sources and one S-Video and one composite connection for SD sources. There is also a VGA D-Sub port for connecting a PC to the panel. As this is a display panel, it doesn't have a TV tuner. If you want to watch free-to-air TV on the unit, you'll need to buy a set-top box.

The speakers produce good sound, with only a small amount of distortion at high volumes. However, we had a problem with the size of the speakers. When attached to the panel, the speakers don't span from the top to the bottom of the bezel. They seem to be too small for this unit. We couldn't help but feel they looked wrong on the unit and those buying the P42XHA58EB may want to consider using a home theatre system rather than tarnish the overall aesthetic.

The Fujitsu PlasmaVision P42XHA58EB is a great unit capable of delivering reasonable high definition images while also being able to convincingly display standard definition as well. Its PC mode works far better than most plasma panels we've reviewed and the overall design is quite attractive.

The price quoted on this page is the cost of the P42XHA58EB as we reviewed it. At the time of publication, the unit had an RRP of $6499, but this doesn't include the stand or the speakers. Both accessories were included in our review unit and we therefore added them to the RRP of the panel. The stand and speakers retail for $499 a piece. Considering most panels come with these accessories as standard, we feel this figure is rather excessive.