A laptop you can fit in your pocket or handbag -- but would you want to? The Fujitsu LifeBook UH900 is a little marvel when it comes to PC miniaturisation, but it's too small and cramped to use effectively. It's a device for consuming media rather than creating -- it's very difficult to type on its little keyboard or use its undersized touch screen. However, we do like the fact that it has an integrated 3.5G modem that can be used with the carrier of your choice.

Fujitsu's LifeBook UH900 is an ultra-mobile PC (UMPC) that weighs around 500 grams and is only 20cm long, 10.5cm deep and 2.5cm thick. It's designed to be a non-obtrusive, fully functional computer that you can discreetly use to check e-mail and view presentations while on the road. However, the UH900 is so small it's conspicuous; computers this small aren't frequently spotted out in public, and this one is bound to turn heads.

It has a shiny body and a chrome trim and we believe it's a product that's firmly aimed at the female half of the tech market. In saying that, even some women may not appreciate the Fujitsu LifeBook UH900 because it really is awkward to use. Its size reminds us of Sony's PlayStation Portable, and you have to use it in a somewhat similar fashion, too.

There is a thumb-pad on the right side that you use to manipulate the cursor, while the left- and right-click buttons are on the left side. Furthermore, if you try to type on the UH900 in the same way you would on a regular-sized laptop then you will find the going difficult. 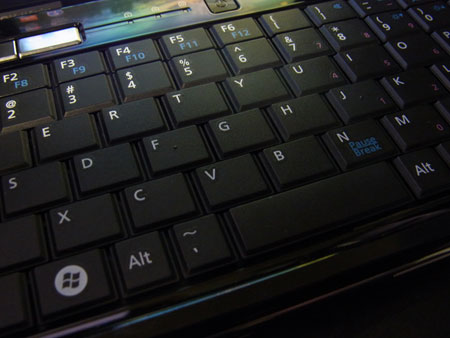 It has a QWERTY keyboard, but there is no palm rest (we didn't expect one on a device this small, but it's still worth pointing out), and the keys are only 14x11mm; the space bar is only 4cm long! There is no way any mere mortal can type quickly on the UH900 without having to sift through a tonne of spelling errors.

It's a device that's conducive to slow typing and the most comfortable way to use the Fujitsu LifeBook UH900 is to hold it with one hand and type with the other. If you sit it in your lap, typing will be uncomfortable and you will also probably strain your eyes trying to see the small text on the 5.6in screen, which has a native resolution of 1024x600 pixels.

The screen has multitouch capability and it ships with a little stylus, although you can also use your fingers. It's not a tablet-convertible screen, unlike Dialogue's slightly larger 2008 Flybook V5 UMPC, for example. This means that you pretty much can't write on it. Furthermore, despite being accurate, it's awkward to use the touch screen for navigation and Web browsing when the UMPC is sitting upright with a keyboard in front of it.

The screen has shortcut buttons on either side of it. The three buttons on the left (seen above) were automatically set to launch the Calculator — we were able to change this through the 'LifeBook Application Panel for One Touch Buttons' program — while the two buttons on the right can be used to scroll up and down in a Web browser or office applications (these worked straight out of the box).

There is plenty of space on the sides of the screen that seems wasted; we also can't help but think that the touch-screen capability is wasted on such a small unit. Fujitsu should have wowed us with a higher-resolution 8in widescreen panel instead.

So what can the Fujitsu LifeBook UH900 be used for? Well, it has an Intel Atom Z530 CPU on the inside, along with 2GB of RAM and a 64GB solid-state drive. These are the same specifications as the Sony VAIO P-series (VGNP15GG) notebook. That means you can load up Microsoft Office (or any other office suite) to preview documents and presentations.

While the UH900 isn't easy to create content with, you can use it for proofing documents and rehearsing presentations before a meeting. There is a proprietary port on the front that can be used to plug in a VGA dongle, and there is also an integrated Bluetooth adapter and two USB ports, so you can even use the UH900 to run your presentations while on location.

The UH900 is about as fast as a typical netbook, although it does feel a little more sluggish during Web browsing. Nevertheless, in our Blender 3D rendering test, the UH900's CPU rendered our test file in 7min 37sec. This is actually a decent, middle-of-the-road time for an Atom-based computer. You can listen to music, watch videos and view photos on the UH900.

Even though the chassis is petite, there is an SD card reader, so you can just dump photos from your digital camera to edit them and inflict them on your online friends. While watching videos in full-screen mode, we noticed a flashing green line at the bottom of the screen; we got used to it after a while, but it was annoying.

You won't be able to watch videos for too long while you're out and about. In our battery rundown test — in which we loop an Xvid-encoded video while the screen brightness is maximised, the wireless radio is enabled and power management is disabled — the UH900 lasted only 1hr 24min (24min less than the Sony P Series). With the default power saving scheme we were able to browse the Web for just on two hours before it conked out.

The UH900 has a slim lithium-ion battery on its base. Understandably, due its small size it only has an 1800 milliamp-hour (mAh) rating.

After a while, the notebook gets a little warm. It has a small cooling fan that kicks in when the CPU is under stress, and it makes a very audible whirr. 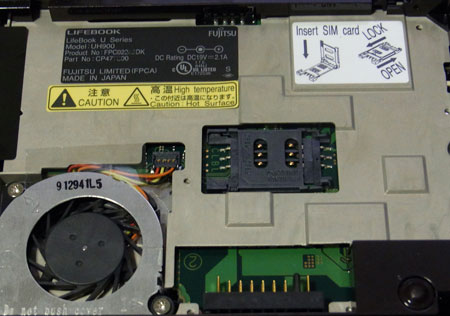 When you remove the battery, you can see this fan, as well as the SIM card reader. Conveniently, the UH900 has a built-in 3G modem (Sierra Wireless Gobi 2000 HS-USB) and you can just insert a SIM card from the provider of your choice to access the Internet while you're on the road. It also ships with Fujitsu's 'One Click Internet' utility, which allows you to connect to your 3G network.

Other software on the LifeBook UH900 includes the 'ODD Sharing' client, which we first saw in Fujitsu's LifeBook P3110 netbook; ThinkFree Mobile, which allows you to synchronise office documents; Fujitsu diagnostic tools and file recovery software; and CyberLink YouCam, for recording videos and taking snapshots.

Because the webcam is located just to the right of the screen, instead of at the top, it can be hard to centre yourself in front of it. Furthermore, if you want to use the UH900 for Skype calls, you'll be better off plugging in a USB or Bluetooth headset. There is a built-in microphone, but even in a quiet room you'll have to speak with the UH900 a few centimetres away from your mouth to make it work properly. With integrated 802.11n wireless networking, you can sit around your lounge or even lie in bed as you Skype.

With an asking price of $2099, the Fujitsu LifeBook UH900 isn't cheap. Where it fits in the current tech gadget hierarchy is a little hazy; its battery life is such that it won't replace your smartphone and its usability is definitely not on the same level as a netbook. The touch screen is useful for approximately zero tasks — it's too small and sits up straight, so it's not useful as an eBook reader, and its resolution is too fine to navigate around Windows using your fingers.

It's a very limited-use product and it will only appeal to users who want a fully functional computer that can fit into a cargo pants pocket or a handbag. It can be used for answering short e-mails, Web browsing and previewing presentations, but it's not a great tool for on-the-go content creation.

If we had to choose between the Fujitsu LifeBook UH900 and the Sony P Series, we'd go for the latter because of its larger screen, TrackPoint-style pointing device and slightly better battery life.