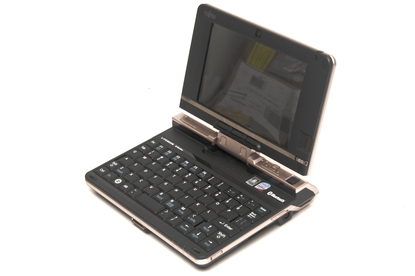 Although it isn't a bad unit in its own right, the Fujitsu doesn't shine as well as it should given its budget competitors and high price point. If you're looking for a unit that has a great touch screen, a fast Intel Atom processor and great connectivity, you're probably better off waiting a month until the upgraded 3G model reaches Australia.

When many people think of 'netbooks' they often picture devices like the ASUS Eee PC 1000H. Cheap and simple to use, ultraportable notebooks have proven to be a hit thanks to their convenient size, despite their frequent lack of high-end features.

Although Fujitsu’s LifeBook U2010 is just as portable as the EeePC, it’s completely different in almost every other respect. More features, better performance and a much higher price tag mean that this small notebook is a tempting, albeit pricey, solution for those craving more from their tiny machines.

The most impressive aspect of the LifeBook is its tiny stature. Measuring just 172x135x34mm and weighing just 590g minus the power supply (800g all together), the U2010 is barely the weight of two smartphones. It’s also aesthetically impressive, avoiding the bizarre wings of its cousin, the Lifebook U1010 3.5G.

The 1.6GHz Intel Atom Z530 processor that powers the U2010 has been designed for this type of unit. Small and energy efficient, the relatively powerful Atom compares favourably to previous CPUs and runs the Windows Vista Business operating system very smoothly during basic office tasks. Heat isn’t an issue and the device remains comfortable to hold throughout use.

Unfortunately, when it comes to more hardware-intensive tasks the LifeBook is fairly ineffectual. Much of this can be attributed to the lonely 1GB of 533MHz DDR2 RAM that is built into the system. This situation isn’t helped by the relatively small 60GB hard drive that spins at 4200rpm. Our iTunes test, where we convert 53min of WAV files into 192Kbps MP3s, returned a sluggish time of 8min 13sec. By comparison, the HP Compaq 2510p (FH409PA) returned a time of 2min 13 sec; the EeePC 1000H took 13min.

The U2010 is let down in the usability stakes by its tiny keys, which are difficult to type with. Regular users will eventually grasp these controls but will probably still find it difficult to create lengthy documents with them.

While this could be excused in the case of the Lifebook U1010 3.5G due to fantastic mobile Internet access, the 3G-enabled version of the U2010 won’t be hitting our shores for at least another month. Unfortunately, the Australian version doesn’t include the built-in GPS module found in overseas models.

On the bright side, the 5.6in touch screen with a native resolution of 1280x800 is highly responsive and offers excellent colour contrast. To the right of the display is a fingerprint scanner that adds a little extra security, while a 1.3-megapixel camera makes video chatting simple.

In terms of network connectivity the U2010 is a mixed bag. 802.11n wireless networking is built-in but the 10/100 Ethernet port is connected via an adapter that comes bundled in the sales package.

An interesting feature is the FM broadcaster component. Commonly found in devices like the Griffin RoadTrip with SmartScan, this added functionality means that music can be played in cars through the radio without the hassle of using an additional connection.

There aren’t many more selling points. The Type II CF card slot and SD card slot are useful but there is only one USB 2.0 port. Built-in Bluetooth connectivity with the A2DP profile allows users to pair compatible headphones or speakers for wirelessly streaming of music.