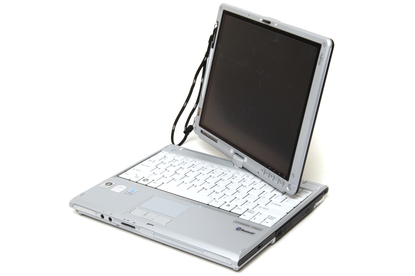 The Fujitsu Lifebook T4220 is a powerful and responsive Tablet but the indoor/outdoor screen coating may irritate people who plan to use the device insode more than outside.

The convertible Fujitsu T4220 Tablet PC and notebook is a solid and powerful machine with essential tools, some good security features and a responsive interface. However, it does have some irritating features that might be enough deter people from what is otherwise a good choice.

Offering both notebook and Tablet functionality, the Fujitsu T4220 provides the best of both worlds. With its Intel T7500 Core 2 Duo CPU running an 800MHz front side bus speed, a perk of Intel's latest Centrino Duo platform, 2GB of DDR2 RAM and the Windows Vista Business operating system, the Lifebook T4220 runs smooth and fast. However, as a tablet, it's a little bulky and can get reasonably warm when running in high-performance mode. It only weighs 2.2kg, but even this can get tiresome if you're planning to carry it around all the time.

Apart from its size, it's a very nice tablet to use. The pen is very responsive and accurate and a set of buttons on the face of the notebook make it easy to access important functions. Five buttons trail from the power button, which sits at the bottom-right of the screen when the T4220 is in notebook mode, but varies depending on your orientation in Tablet mode.

One button acts as an enter key, another can be used to rotate the screen; another two act as page up (A) and down (B), but also act as shortcut keys when the final key, a function key, is held down first. In our review model, the shortcut keys A and B were programmed to the calculator and to a handwriting notepad. If the function key is pressed on its own, a Fujitsu menu appears giving you quick access to features such as the Control Panel, screen settings, power settings, printing options and brightness settings, among others. The enter key also acts like a Ctrl+Alt+Del key when held down for two seconds.

As well as a fingerprint reader on the screen (for access in Tablet mode), the Fujitsu Lifebook T4220 can use these four buttons for password protection during boot up.

The screen is bright but the coating, which is for the protection of the LCD and which is also designed to provide glare protection when used outside, distorts the image quite severely. Ultimately this coating makes the image look noisy, similar to the way a poor-quality video might look. It's less noticeable on dark colours, but whites and other light shades show an awful grainy image.

In our benchmarks, it did well, scoring 71 in WorldBench 6. This score would have been higher, but a software error, which can't be attributed to the T4220, caused it to fail one of the tests. In our MP3 encoding test, which involves converting 53min worth of WAV files to 192kbps MP3 files, the T4220 took just 76sec in iTunes, and 118 seconds in Cdex.

In the battery test, it also performed well, lasting two hours in our DVD rundown test. In normal usage conditions, the T4220 should run longer. The DVD test is a worst case scenario test, which uses the optical drive, the CPU, the graphics and the LCD screen, as well as the speakers, to drain the battery.

A 120GB hard drive is installed and a DVD re-writer is also available for storage. Three USB 2.0 ports are installed as well as a media card reader (SD, MMC, MS, MS-Pro), a PC Card slot and there is one VGA port. For networking the T4220 offers a 56k modem, Bluetooth, Wi-Fi 802.11 a/b/g and draft-n, as well as a gigabit Ethernet port.