The Fujitsu LifeBook LH700 is a little underdone in the RAM and hard drive departments, but its build quality and style are great. It's a notebook that's aimed primarily at young users and students, but let's not be discriminatory: it's a great notebook for young and old alike. We think its price could be a little lower considering its configuration, but it's the style and build quality that you mostly have to pay extra for, and if you can afford it, it's worth it.

The Fujitsu LifeBook LH700 is a 2.4kg, 14in notebook that's aimed at young people, students in particular. Fujitsu may not be the first brand that pops into a student's mind when it comes to getting a value for money laptop, and the LH700’s $1349 price tag is slightly high considering its CPU class. However, it has plenty of great features, stylish looks and is well built.

The Fujitsu LifeBook LH700 runs a 2.13GHz Intel Core i3-330M CPU that has two cores and Hyper-Threading, for a total of four virtual cores. You also get 2GB of DDR3 SDRAM, a 320GB, 5400rpm hard drive, and an NVIDIA GeForce 310M graphics adapter with CUDA technology (which allows the GPU to be used instead of the CPU in certain applications, such as Adobe Premiere Pro and CyberLink movie playback software).

There is enough power under the hood for more than just writing reports and making slideshows: you can edit videos, manipulate photos, transcode media files and rip DVDs, for example. In our Blender 3D test, it took 1min 15sec to render an image in 3D, while in the iTunes MP3 encoding test it took 1min 36sec to convert 53min worth of WAV files to 192Kbps MP3s. These times are slower than expected — the MSI CR620, for example, was much faster in these tests. Nevertheless, the LifeBook LH700 is more than capable of handling most office and entertainment tasks you throw its way.

The graphics card is strong — it recorded 3702 in 3DMark06, which means that it's capable of running older games and some newer ones, but only with low or mid-range graphics details. The notebook's hard drive is a weak point, however. The 320GB Western Digital (WD3200BEVS-16VAT0) hard drive recorded 22.08 megabytes per second in our tests, which is approximately 6MBps slower than expected. It's even slower than some netbooks we've seen recently, such as the HP Mini 210.

The LifeBook LH700 is designed to stand out — we reviewed the white model, but there is also pink available for those who are into that sort of thing. It has plenty of style and some subtle features that should appeal to many users. For example, the status lights at the front of the notebook are soft and multi-coloured, which is a nice change from harsh white or blue lights that can be tiring and distracting at night. Furthermore, the notebook's chrome details and glossy finish command the eye — the only blemish is the pattern that's punched into the plastic to act as a grill for each speaker; we think it looks ugly, but the speakers sure do produce plenty of sound.

Fujitsu has also added a tinge of excitement to the LH700: shortcut buttons above the keyboard light up in series when you hit the power button — it's something that we think many students will dig.

The touch buttons above the keyboard light up in series when you switch on the notebook. It's a nice touch.

The LH700 is mostly good looking, and it's also well built. It has a strong base and a smooth yet sturdy hinge. Applying pressure to the lid will not result in large puddles appearing on the screen. A built-in DVD burner lives in the right side of the base. While this contributes to a little bit of creaking from the base, it does not compromise its strength. You can lift up the SH700 from the right corner with one hand and it won't bend.

The built-in DVD burner is just one of the useful features in the notebook's base: you also get three USB 2.0 ports, mini-FireWire, HDMI, Gigabit Ethernet, an ExpressCard/34 slot, an SD card slot, and eSATA. The eSATA port doesn't double as a USB 2.0 port, and this is a shame for users who don't have an appropriate external hard drive. A VGA port is missing, so students with older monitors will have to either put up with the notebook's 14in screen, or invest in an HDMI-enabled display. But really, if you’re in the market for a notebook like this then you’ve probably already got a nice monitor or TV.

The screen on the LifeBook LH700 is decent, but it's too reflective for our liking; using it out in the quadrangle on a sunny day might be hard, and by the same token, lights in a lecture hall might also annoy the heck out of you. Some users might notice a fine grid-like pattern to the screen, which can be distracting when viewing photos. The viewing angles of the screen are narrow, and this can make it difficult to watch movies, especially if you have to adjust the screen to get rid of reflections. 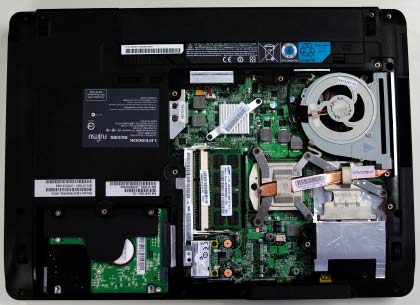 We like the easily removable access panels on the base, which let you quickly get to the RAM, hard drive and CPU should you ever need to replace or upgrade them. There are two SO-DIMM slots, so you can beef up the laptop's memory capacity to 4GB or 8GB.

The LifeBook LH700 has full-sized keys that are not too resistive and which possess good travel. The keyboard is spill resistant, and it bounces a little (some keys in the middle feel a little rickety), but writing this review on it was mostly a joy. The touchpad, despite being small, is highly responsive and it supports gestures. You can flick, zoom, rotate and use ChiralMotion scrolling, which we love. The Fujitsu LifeBook SH760 actually has a dedicated scroll pad that works using ChiralMotion.

The only thing that's uncomfortable about the LH700 is its palm rest. Some heat from the internal components rises through the palm rest; coupled with the glossy finish, this can lead to sweaty and slippery palms. Using the notebook on your lap will be uncomfortable after a while because the base gets warm, but the internal fan does a tremendous job of extracting warm air through the left vent. If you put your hand next to the vent for even a short amount of time, it will get nice and toasty. 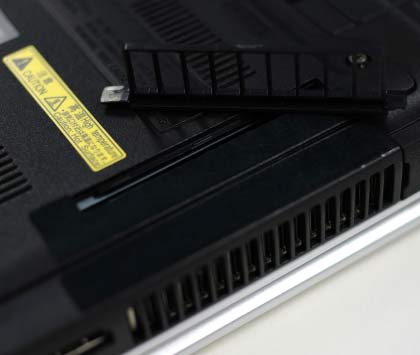 There is a removable module between the vent and the extraction fan so that you can get rid of any lint that has collected.

The touch buttons above the keyboard can be used to launch some predefined applications: Fujitsu support, the default Web browser, the webcam application, an e-mail program and Eco mode. Eco mode is a power scheme that disables the speakers, the ExpressCard slot, the FireWire port, the LAN port, and also dims the screen. However, if you enable Eco mode while the notebook is plugged in, you have to enable it again when you unplug the power supply.

In our battery test, in which we disable power management, enable Wi-Fi, turn up the brightness and loop an Xvid-encoded video, the LH700 ran for 2hr 28min. This is a fair result for a 6-cell battery on a 14in notebook, and you'll be able to get more out of it depending on your usage pattern and power management plan. For example, using Eco mode (but with audio enabled, too), the LH700 lasted an extra 21min in the same test.

We love the build quality and style of the Fujitsu LifeBook LH700 and we think it’s a great notebook to consider despite being a little sluggish. It has plenty of features and can be used for everyday work tasks, some gaming, and even DVD ripping and video encoding. For the price you pay, you really should be getting 4GB of RAM instead of 2GB, as well as a 500GB hard drive instead of 320GB. But let’s face it, you’re paying a bit extra for something that looks good and is comfortable to use, and if you can afford it you should definitely consider it.