A 15.6in Fujitsu laptop that's designed primarily for business users Fujitsu's LifeBook E780 is designed for professional users who want a fast notebook with a high screen resolution that's also capable of being relatively easily transported. It's well built, has good security, and you get lots of connectivity. However, it could use a faster hard drive and a DVI or HDMI port.

Fujitsu's LifeBook E780 is a 15.6in widescreen laptop with a boxy design and a tacky, two-tone colour scheme. Don't let its look deceive you though as it's actually a powerful notebook that's well built and has plenty of features. It's aimed at professional users; in particular, users who want a desktop replacement that can also be taken on the road.

The Fujitsu LifeBook E780 is powered by an Intel Core i7-620M CPU and runs Windows 7 Professional (64-bit edition). You get 4GB of DDR3 SDRAM, an NVIDIA GeForce GT 330M graphics adapter and a 500GB, 5400rpm hard drive. It's a configuration that's more than capable of running the latest office applications and it can also be used for more taxing endeavours, such as video compression and image manipulation. 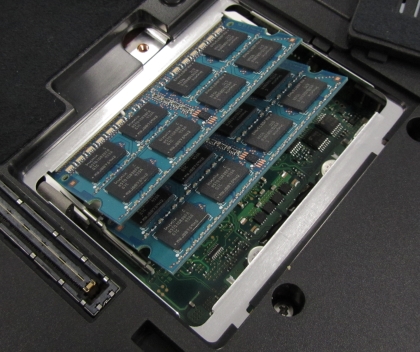 The LifeBook's 4GB of RAM is contained in two slots that are easily accessible on the bottom of the chassis.

In our tests, the LifeBook E780 didn't break any records: it recorded times of 57sec and 51sec in our iTunes MP3 encoding and Blender 3D rendering tests respectively. These times are slightly down compared to the Fujitsu LifeBook SH760 (52sec and 50sec respectively), which is the company's 13in, Core i7-620M-based notebook. In our video encoding test, in which we use Auto Gordian Knot to compress a 4GB DVD file to a 1.5GB Xvid file, the LifeBook E780 took 1hr 5min, which is what we expected. Its hard drive transfer rate of 25.23 megabytes per second is also a little slower than the 26.83MBps of the LifeBook SH760. Nevertheless, we're only talking about minute differences that won't be a hindrance to overall productivity. Graphics performance was good. Its score of 6506 in 3DMark06 means it will be able to handle some gaming, such as some undemanding RTS games, but it's not suitable for the latest 3D shooters. 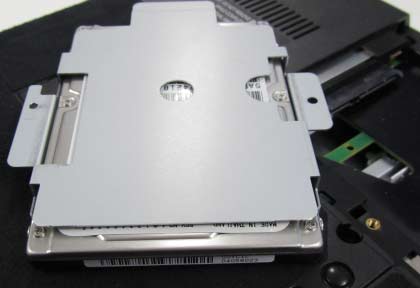 The 500GB hard drive sits in a cage and its heads are parked every time the shock sensor detects too much movement. If you have the shock sensor set too high, even slight bumps and movements can set it off. If you're watching a movie off your hard drive when this happens, the video will stutter.

The notebook's 84 Watt-hour (Wh) battery lasted 2hr 4min in our tests, which is a good result for such a big and powerful notebook. In comparison, HP's ProBook 6540b, which has a 55Wh battery, a 15in screen and a Core i5 CPU, recorded 2hr 6min.

With two CPU cores (plus Hyper-Threading) and a screen with a native resolution of 1920x1080, multitasking will be a breeze and you can be very productive. Not only will you be able to run four applications simultaneously without noticing a slow-down in performance, with the wide resolution (1920 pixels) you'll also be able to line up two windows side by side and view them in comfort. If you work with images and video, you'll appreciate the high screen brightness, as well as the matte finish of the screen; reflections from lights won't be a problem and the side viewing angles of the screen are excellent. It's one of the best laptop screens on the market.

Despite the widescreen 16:9 aspect ratio, the LifeBook E780 is still as big as a laptop with a 16:10 screen ratio — it has a length of 37cm and depth of 25.5cm. It's a solidly built notebook that feels rigid when you pick it up, and its hinges hold the screen perfectly in place. However, its keyboard bounces ever so slightly while you type and this can be off-putting the first time you use the notebook — we quickly adjusted to it. The keys have good travel and bounce, but they feel a little too stiff and you end up having to hit them a little harder than normal. It's a spill-resistant keyboard, so if you accidentally knock over your drink you can power down the notebook and turn it upside-down to drain the liquid (then let it dry before you use it again). 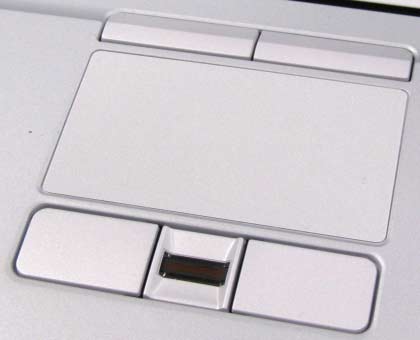 Navigation is by way of a small touchpad that has two sets of buttons. A fingerprint reader is nestled between the main left- and right-click buttons.

The touchpad looks like a tiny island on the vast palm rest, as it's only 6.1x3.8cm, but it traverses the high resolution screen quickly and accurately. It doesn't have extensive gesture support: you only get support for zooming (pinching) and moving back and forward (two-finger flicks) in a photo viewer or Web page. The Synaptics mouse driver also allows you to employ ChiralMotion scrolling, so you can scroll a long page with one continuous swirling motion of your finger. There is an extra set of left- and right-click buttons above the touchpad, which makes it seem like Fujitsu entertained the thought of including a TrackPoint-like device in addition to the touchpad but vetoed the decision at the last moment and the button removal crew didn't get the memo.

There are plenty of ports and slots around the edges of the E780; it includes four USB 2.0 ports, a VGA port, Gigabit Ethernet, a 56Kbps modem, a FireWire port, and audio in and out ports. It also includes a DisplayPort, which can be used to connect a big-screen monitor that has a resolution higher than 1920x1200. Unfortunately, you don't get a DVI or HDMI port, so if you use a monitor that doesn't have DisplayPort, you'll have to settle for the analog VGA connection. A serial port is also present, and this is handy for users who need to program or gather data from an external device (such as a multimeter, for example). There are two slots on the side for ExpressCard/54 and PC Card slots. You also get 802.11n dual-band Wi-Fi, Bluetooth, a smartcard reader, an SD card slot, and a webcam (which is mounted slightly off-centre). 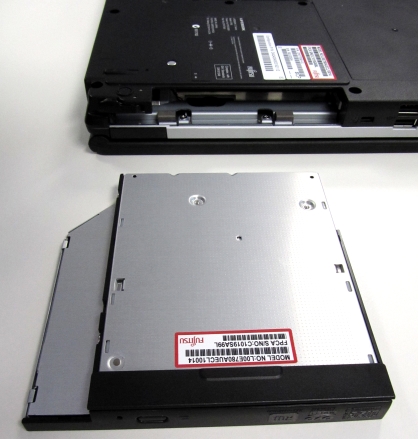 A DVD burner is installed on the right side of the base in a modular bay. You can easily remove the burner to install an extra battery or a weight saver. The LifeBook E780 weighs 2.9kg, so it's worth replacing the drive with a weight saver if you know you won't need an optical drive while you're on the road.

Security is by way of a very accurate fingerprint reader that's located between the touchpad buttons. It works with OmniPass software, which allows you to store credentials for regularly visited Web sites so that you can log in just by swiping your finger instead of typing a username and password. The scanner captured our prints perfectly during the registration process, and during subsequent scans we were always able to log in to the system using one quick swipe. Fujitsu has employed a scanner that uses radio frequencies (RF) and can scan beneath the surface of your finger, so blemishes or dirt won't get in the way.

There's no doubt that the Fujitsu LifeBook E780 is costly, but it's worth it if you want a laptop with a high-end CPU and a vibrant, Full HD screen. We wish it also had an HDMI or DVI port, and that the keys were a little softer to press. (The location of the Kensington lock on the right side is also awkward.) But overall, we like the build quality, the excellent screen, and the long list of connectivity features.