Fujitsu Lifebook U937 review: A lean laptop you might be able to get away with 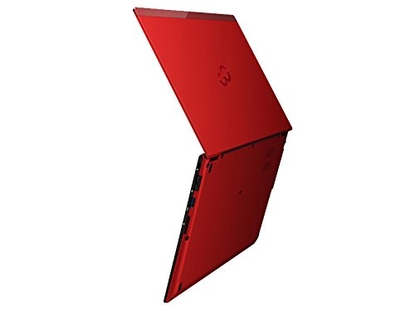 A laptop that dips its toes in lots of different corners but fails to take a solid enough step in any particular direction to make its mark.

When you think laptops, notebooks and netbooks, Fujitsu isn’t necessarily the brand name that immediately comes to mind. Particularly, within Australia. When you think lean, powerful and portable PCs, legacy brands like Acer, HP and Dell drift into focus far quicker Fujitsu does. Especially when it comes to the consume space. Cameras and printers, sure. Laptops? Less so.

It’s against that tendency that the company’s new U937 Lifebook aims to dismantle. Or, at least, push back upon. Deliberately or not, it's hard not to treat the U937 like it's making as much of an argument for itself as it is the Fujitstu brand as a whole.

In terms of storage options, the Lifebook U937 comes with a 512GB SSD. Counting the ports, it’s armed with two USB 3.0 slots, a SD Card slot, a HDMI port, a headphone jack, a full-sized LAN connector and a noble lock slot. Lastly, the U937 boasts both WiFi and Bluetooth connectivity.

The review unit we tested relied on an Intel Core i5-7200U paired up with 8GB of RAM.

Despite its magnesium aluminum housing, the Lifebook is surprisingly light. It weighs in at just 812g. My regular notebook of choice is currently the Samsung Notebook 9 and while the U937 isn’t quite as lightweight as that - it was immediately comparable in a way that few laptops are. That said, the build-quality itself does leave a bit to be desired. To the touch, it feels cheaper than it should be.

All things being equal, the weight of this laptop is probably the biggest thing the physical design has going for it. The second-biggest thing the U937 has on its side is the crimson color scheme. At a glance, it’s genuinely quite striking and much more memorable than the stock-standard black, gold, silver and grey palettes you usually find among the modern laptop crowd.

Unfortunately, the display on the U937 was a little less impressive. Even at the brightest settings, it often came across as a little dim or, at the very least, kind-of ordinary. This isn’t a huge shock. After all, the U937 has a pretty conventional LCD panel with a pretty conventional resolution. It’ll get the job done - but it does look a little worse for wear when compared to a some of its competition (like the recent Dell XPS 13).

The trackpad is another definite weakness here - though it is somewhat counterbalanced by the keyboard, which carries a consistent and satisfying punchiness to it. Otherwise, everything on the U937 is more-or-less is where you expect it to be and - once you’ve accustomed yourself to the weight and shape of the thing - there are few surprises to be found.

This isn’t to say there are no surprises here. For example, the hidden ethernet port on the U973 slides out from the side of the unit and unfurls into a full-sized port. There’s a fragility to the mechanism here, which is worrying. However, as someone who has never encountered a laptop with this particular party trick up its sleeve, it definitely adds some charm and character to the thing.

The U937 also boasts a number of security features, envisioned as an inclusions that seal the deal for business or enterprise users who need that extra bit of digital protection. It’s got an embedded palm vein and fingerprint sensor, SmartCard reader and TPM 2.0 capabilities. However, these inclusions are a ever-so-slightly saddled by the conspicuous (but not deal-breaking) absence of the Hello Windows facial recognition system found in recent laptops from Dell, HP and Microsoft themselves.

In terms of the everyday performance it offered, the Fujitsu U937 Lifebook was pretty fast and responsive - but it didn’t really blaze through tasks with the same tenor or zeal as some of the other laptops we’ve recently reviewed. However, we expect that a significant reason for this was due to the specs on the model we were sent.

Our U937 relied on an i5 with only 8GB of RAM. Of course, it’s going to come off worse for wear against the i7-powered performance of the Acer Spin 5 and Zenbook Flip S. 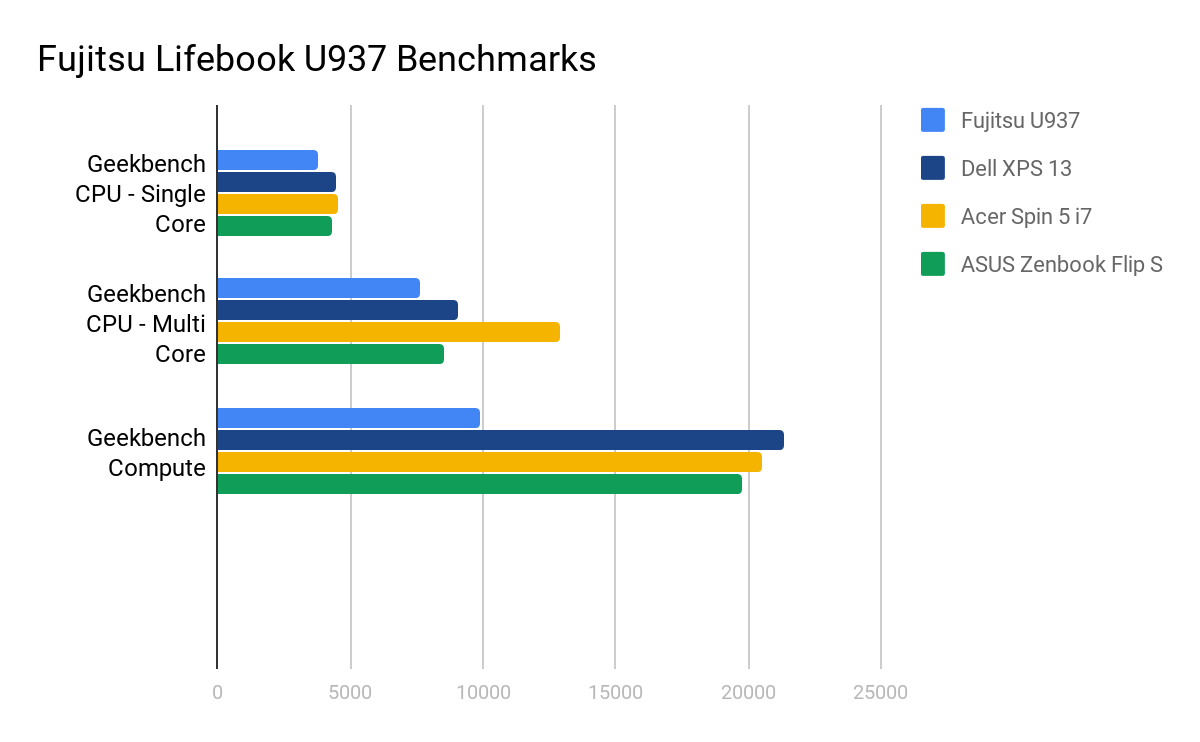 Fujitsu claim eleven hours of use per charge. In our experience, we found it usually got pretty close to that - give or take a handful of hours here and there. As always, your mileage will vary. Regardless, it's still definitely a strength for the notebook.

Still, we ran down the battery using the Battery Eater test and it took two hours and thirty minutes to run down to zero. This is a pretty decent result but it does put it, again, well behind the Dell XPS 13.

All things considered, the Fujitsu Lifebook doesn’t really have what it takes to be the next "must-have laptop" of the moment. However, it could probably cut it as “the laptop you can get away with”. Or at least, you could if it was priced accordingly. As it stands, it’s more expensive than a lot of its competition and doesn’t quite deliver on the expectations afforded to it by that higher price.

There’s a lot of ambition reflected through the internal and external characteristics of the U937. However, that ambition ultimately falls a little bit short of where it ought land. At a glance, the aesthetics seem refreshing. Unfortunately, it doesn’t take long for the luster to fade into the same old song and dance.

In the moment, the performance here is mostly fine but the broader context sees it lag behind when it - and Fujitsu - probably need to be gaining ground. Without the courage to go all in, the company are left with a laptop that dips its toes in lots of different corners but fails to take a solid enough step in any particular direction to make its mark.