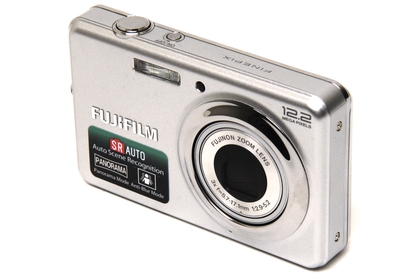 Fujifilm's Finepix J30 is a simple to use compact digital camera, but it doesn't have anything to set itself apart from the crowded market of similar point-and-shoot cameras.

The Fujifilm Finepix J30 is a compact point-and-shoot digital camera that takes reasonable pictures in its default mode. It's not a particularly innovative camera, though — apart from a good panorama mode and decent low ISO image quality, it does nothing to set itself apart from the crowd.

The Finepix J30 digital camera has a simple fascia, free of the clutter and excess badging that cheaper cameras seem to have in abundance. It's a glossy silver finish with a few chrome accents, with the lens off-set to the left. The 3X zoom lens has a maximum aperture of f2.9 — pretty standard for a compact digital camera. The Fujifilm Finepix J30 captures images at 12.2 megapixels, which is enough to print out photographs at A3 or A4 sizes.

The camera itself is very reasonably sized. At 20mm thick, 92mm wide and 56mm long it's easily able to be slipped into a jeans pocket, and even with the lens extended the camera is thinner than the body of the Canon Powershot G10 and Canon Powershot SX20 IS for example. The 2.7in LCD screen is bright, but its low resolution and jumpy refresh rate means you might take some out-of-focus shots without realising. There's no optical viewfinder, but we didn’t expect one on a camera of this size and price.

The flash unit built in to the front of the camera is reasonably powerful for its size, offering a decent fill flash ability for dark scenes. In the Flash white balance preset we found the camera to represent skin tones reasonably well. Activating all of these functions is done through the variety of buttons on the camera's rear. Anyone who's used a point-and-shoot camera will be instantly familiar these buttons — there’s a five-way jog dial, a display toggle and playback button, and a zoom rocker. The menu is easy to navigate, but the semi-transparent nature means that if you’re trying to change settings while the background changes you might get confused.

The 3X optical zoom gives the camera a 35mm-equivalent zoom range of 32-96mm. With other compacts sporting 4X or 5X zooms it’s a little behind the technology curve, but the lens’ quality is generally good. A reasonable macro mode allows images to be captured from as close as 10cm away, with pleasing blurring of the background. We didn’t notice any significant barrel distortion or significant chromatic aberration in our test shots. In-camera image stabilisation helps to capture low-light shots — we found it useful down to around 1/15sec at ISO 400.

The Fujifilm Finepix J30 functions reasonably well from ISO 100 to 400, and only a little image grain was visible when examining the photos closely in our tests. At ISO 800 and 1600 it showed a marked increase in image noise and detail loss, while the three megapixel ISO 3200 mode is strictly for blurry-Sasquatch-photo enthusiasts. A rudimentary movie mode captures VGA resolution movies with monaural sound.