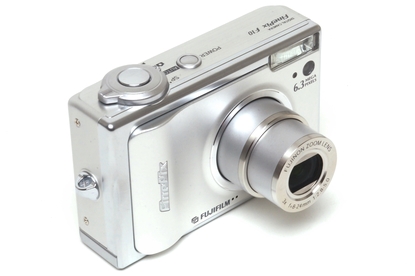 If image quality is all that matters to you, then the F10 is a good choice, but it's let down by a few omissions and a price tag to rival some 7 megapixel models.

If you're looking for great images, then look no further than the Fujifilm FinePix F10. This camera impressed us with incredibly detailed, rich photos. It does suffer from blurring around the edges of the images, but that seems to be commonplace among all cameras in its class, and it doesn't really detract much from the end result unless photographs are blown right up. When compared to the 7 megapixel models in this category (the F10 shoots at 6.3 megapixels) it held up very well, and definitely would be a viable alternative to the higher resolution models.

The camera is quite heavy and solid; it's a combination of plastic and metal, but the front plastic plate feels like it could be a weak spot. After putting so much effort into turning out wonderful images, Fujifilm could have put a little effort into making the camera stylish as well. Some of its other models, such as the Z1, are right up there with some of the best-looking models on the market, yet with the F10 it seems to have settled for a basic design.

It does come with some nice features, however, including a 2.5" LCD. It also has lightning fast boot-up speeds and minimal shutter lag. The set of functions available was a bit of a disappointment, with minimal manual controls for the more experienced photographer. There are the basic white balance and exposure adjustment controls, but nothing that gives you any real control over the image. It is also missing any sort of automatic exposure bracketing function, but it does have a good 40-shot continuous shot function, to help capturing fast action or a specific incident in full. The ISO options are perhaps the one saving grace, offering values all the way up to 1600, which is far and above the usual 400 present on a standard point and shoot. These higher settings are great for taking shots in low light, but do present a certain ammount of image noise.

According to Fujifilm, the battery life is an impressive 500 shots, and during our testing it appeared to hold up that promise. It supports xD-Picture Card and comes with just 16MB on the card in the box.