The Freetalk Everyman HD is okay for chatting, but this webcam is not great for videoconferencing 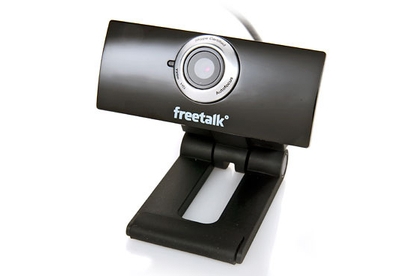 The compact Freetalk Everyman HD is a good webcam for casual Skype video chatting, but the microphone and autofocus are inconsistent and mediocre.

The Freetalk Everyman HD was the first high-def webcam to be certified by Skype, though the highly rated Logitech HD Pro Webcam C910 and FaceVision TouchCam N1FaceVision have subsequently received the same certification. Sold through Skype's online store, this ultralight model has several traits that make it a great travel companion: small size, a reasonable price, and plug-and-go software. Unfortunately, its performance suffers when matched against the competition's.

The Everyman HD uses a built-in H.264 hardware encoder to work in tandem with Skype HD. Setup is extremely easy: If you already have Skype downloaded to your PC, just open the program and plug the webcam in via its attached USB cable. The webcam will automatically switch on as soon as you answer or initiate a video call.

In my hands-on testing, the webcam's image quality initially seemed much superior to that of a non-HD webcam. I noted crystal-clear colour capture (due to the device's 24-bit true color depth), and the Everyman HD's 720p video capture (at resolutions up to 1280 by 720 at 22 frames per second) performed well. The webcam's autofocus capability focused on me instead of on objects behind me, and the unit supports auto-exposure and auto-white balance to fix colour and contrast. As my calls progressed, however, I found a couple of issues that hampered the call experience.

First, the camera has a wide-angle lens that slightly distorts the subject's facial features. You can adjust the camera manually and clip it to the top or side of your monitor at the best possible angle, but doing so doesn't correct the face-widening problem. The camera's clip works with all sorts of displays, but getting it to remain stationary can be difficult. The Everyman HD is so light that it doesn't stay anchored well, and I had to readjust the position of the camera repeatedly as it shifted slightly throughout my calls.

The camera continually refocused in response to even a simple hand wave or head movement. My Skype partners found the shifting image that resulted very distracting. The unit also had trouble handling sudden changes in light: The screen would display bright-blue hues for a few seconds when I switched on bright overhead lights in a previously fairly dark room.

Another disappointment is the Everyman HD's lack of a built-in microphone. Other webcams in the same price range--for instance, the Microsoft LifeCam HD-6000--include a microphone and delivered better overall performance. With the Everyman HD, you'll have to purchase an external microphone separately to complete your video chatting experience.

Overall, this webcam is a good Skype companion, but I would expect subsequent versions to correct some of its minor flaws. The 720p high-def capture shines in comparison to non-HD webcams and will enhance the picture quality of your Skype video calls, but be aware that its constant refocusing causes a few motion-capture issues.