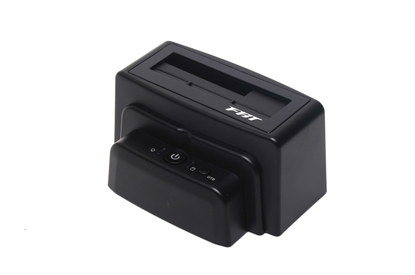 This is a simple hard disk dock that can be used to externally attach internal drives to your computer. It supports both 3.5in desktop SATA drives and 2.5in notebook SATA drives and it doesn't require any setting up; just plug it in to a USB port (preferably of the 3.0 variety in order to get maximum speed) and you're good to go.

A hard drive dock offers an easy way to get data off any old (or current) hard disks that you have lying around. Rather than having to open up your PC or fiddle with installing them in an external case, a hard drive allows you to just plug and unplug disks as you please. The dock that we are looking at here has a USB 3.0 interface and there's nothing complicated about its functionality.

The special aspect of this dock is its ability to accept not only 3.5in desktop SATA drives, but also 2.5in notebook SATA drives. Its slot has a spring-loaded trapdoor that swings downwards to allow 3.5in disks to be installed, but it also has an opening so that you can easily line up and plug in a notebook drive. Inserting drives is simply a matter of lining up the SATA interface on the drive with the interface on the docking unit; you'll have to be careful because the slot doesn't guide the drive down perfectly straight. When you use 3.5in desktop drives, you will have to power the dock with its supplied adapter, but most 2.5in drives can be powered directly by the USB interface.

Because the dock uses USB 3.0, copying or moving data to and from disks will be very quick (as long as your computer also supports USB 3.0) and there is no need to install any software to get the dock to work, Windows will simply recognise any drives you plug in as USB devices. There is a button on the dock that is supposed to be for invoking backup software, but our review model did not ship with driver software to allow this button to function.

There isn't much to this dock at all in terms of required user interaction; pretty much all you have to do is attach the supplied USB cable, insert your drive and connect the power supply (if it's required by your drive). A power button on the dock can be pressed for three seconds to force drives to power down so that you can remove them, but drives will also power down when the computer is shut down. If you'll be removing drives regularly, be careful as many older drives can be very hot around the edges. One particularly old 120GB Seagate drive that we used was practically impossible to handle until we let it cool down.

We like the usefulness of this dock, particularly because we have lots of old SATA hard drives lying around (like the aforementioned Seagate drive, which is almost 10 years old) and this offers a quick way to see what's on them and find any forgotten data. Furthermore, the dock can be used as a makeshift external drive if you don't want to buy yourself a ready-made unit from LaCie, Seagate or Western Digital, but it won't be a pretty solution in this scenario. Our only quibble is that the dock's buttons feel quite cheap and there is no way to easily un-mount a drive apart from a prolonged press of the power button on the dock.

The dock costs $69 and is available from Security Eyes. It can support drives up to 2TB in capacity.