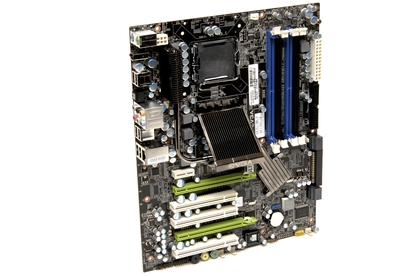 Users looking to implement an SLI graphics configuration should look into this board. It ran reliably in our tests, even when it was overclocked.

The NVIDIA nForce 750i SLI is only a mid-range enthusiast-level chipset, so it's definitely not the bee's knees if you want to build the ultimate gaming rig. However, EVGA has put it to good use on its Intel-based nForce 750i SLI FTW motherboard, offering a stable SLI-capable cornerstone for under $270.

The use of the NVIDIA chipset gives users a chance to run an SLI graphics card configuration, but it's not a full-speed SLI board. This means that one PCI Express slot uses 16 lanes while the other uses eight lanes, instead of both using 16 lanes. This isn't much of a sore point. It's still useful for plugging in two mid-range or entry-level enthusiast graphics, such as ones based on the GeForce 9600 or 9800 chips.

We used two 9600GT-based cards in SLI mode and had no problems at all setting them up. Surrounded by an overclocked Intel Core 2 Extreme QX6850 CPU (running at 3.4GHz), 2GB of DDR2 RAM and a Western Digital VelociRaptor hard drive, the cards combined to score 14,664 in 3DMark06. With only one 9600GT running, a score of 12,046 was obtained. Whether or not the relatively low gain is speed is worth the extra card is up to you to decide.

In the BIOS, the settings for the CPU speed can be changed by manipulating the front-side bus speed (or the clock multiplier, if you have an unlocked CPU). The official front-side bus speed of the 750i chipset is 1333MHz, but we were able to run the board at 1511MHz without it being unstable. There is an option in the BIOS to run the memory in linked or unlinked mode, so you can set the memory speed independently of the front-side bus if you wish, and you can also delve into memory timings. Our 800MHz-rated Corsair memory ran fine at a reported 1333MHz, but refused to go any higher.

Taking the CPU from 3GHz to 3.4GHz was relatively painless, as the board ran our benchmarks without tripping over itself. We saw a speed improvement of 32 seconds in Adobe Photoshop and 22sec in WinZip, while the Blender 3D test gained two seconds.

When installing the board, it's worth attaching the Serial ATA cables for your drives before you actually mount the board. This is because the SATA ports don't point straight up, but instead end up facing the front of the system. They can be hard to access in a case where the drive bays are very close to the motherboard; on the other hand, they can make it easier to hide the SATA cables from view. The board has four SATA ports, which are all controlled by the nForce chipset. They can work in RAID 0, 1, or 0+1 modes. We would have liked a couple more SATA ports by way of a third-party chip, or even an e-SATA port; but in saying that, there are plenty of ports available for conventional USB- and FireWire-based external drives.

Indeed, there is a FireWire port available on the rear panel, along with four USB 2.0 ports and a Gigabit Ethernet port. You also get PS/2, as well as digital and analog 7.1 audio ports. Legacy ports haven't all been relegated to the sidelines by EVGA, as the board has IDE and floppy ports. However, the rear panel is free of serial and parallel ports.

The board could use more PCI Express slots, but the 750i chipset's limit is 26 lanes and these are taken up by one PCI Express x16 slot, one PCIe x8 slot, as well as one PCI Express x1 slot. There are also three PCI slots present, which are next to the long PCIe slots, and one or two of these PCI slots will be unusable depending on if you install one or two graphics cards (because of their heat sinks), leaving only one usable slot. A seventh expansion slot is missing because of the placement of the system chipset.

A useful feature for tinkerers is the on-board reset CMOS button, which means you can restore BIOS settings without having to find a jumper or shorting out the battery, and the on-board power and reset buttons are perfect for when you want to test the system as you are setting it up.

As for the way it looks, the nForce 750i SLI FTW is littered with solid capacitors and some coloured slots, but nothing stands out more than its triangular chipset heat sink. This will probably look good in a windowed case with a white or green light shining on it. The heat sink itself gets quite hot to touch — its surface warmed up to 52 degrees Celsius -— so be sure to use it in a case with plenty of ventilation.

At the end of the day, the nForce 750i SLI FTW was a stable performer, even when running a faster-than-usual front-side bus speed, and it's a good starting block for anyone looking to build a fast system. We do wish it had more SATA ports and some more PCIe expansion slots, but these are limitations imposed by the use of the 750i chipset. If you want more expansion options and an SLI-capable board, you'll have to spend more for a board based on the 780i chipset.