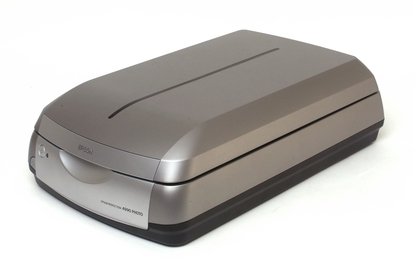 The Epson 4990 offers outstanding performance for both images and film, albeit at a price

At the top end of Epson's range of home and office scanners sits the Perfection 4990 Photo. It's big, it's expensive and it has some impressive specifications, but is it any good?

The Perfection 4990 is a behemoth of a scanner. This hulking device takes up a lot of space and is pretty heavy. It's on the ugly side too and isn't going to be the most aesthetically pleasing addition to your workspace. It certainly has an aura of the Soviet era about it. But looks are about the last thing of importance when it comes to scanners, so it's lucky the 4990's performance doesn't reflect its appearance. But then again the Soviets weren't so bad with their technology either.

Setting up the 4990 is fairly simple although it does appear that the installation program adds about fifty individual programs. Why it was necessary to separate all the functions into a multitude of superfluous programs is a bit of a mystery. This is especially irritating as unlike most scanners the 4990 is lacking the usual array of shortcut buttons. There is one button, which initiates a scan, but it's always nice to see shortcut buttons for printing, emailing and other functions. The primary software, Epson Scan, is split into three modes, each offering different levels of control. The default, Automatic, is straightforward. Put your image, document or film negatives in the scanner, press the button and voila! Up pops your image on the screen. Easy. But this mode is severely limited, the image quality is fixed to a paltry 300dpi and you have no control over the output settings. The second mode, Home mode, offers a little more functionality, but really seems pointless as it neither offers the ease and speed of Automatic nor the power and flexibility of Professional mode. To get the most out of the 4990 it's necessary to delve much deeper.

Professional mode allows the user to gain complete access over every aspect of the scan. From here you can alter the resolution, colour depth and activate a plethora of touch-up options. The 4990 has a maximum resolution of 4800dpi, ridiculously high for everyday use. Most users will have no need to scan at resolutions anywhere near this, such high resolutions are really only of use for scanning film. This is coupled with 48-bit colour depth meaning that images are of stunning quality and clarity. Colour reproduction is superb and the contrast definition immaculate. The output of the 4990 is verging on the kind of performance we would expect from professional equipment. It's speedy too; an A4 colour scan on the default settings of 300dpi takes about 12 seconds.

Where the 4990 really comes in to its own is when scanning film. The 4990 is one of the latest generations of scanners that can use the whole of the flatbed to scan film. This means that you can simultaneously scan up to 24 35mm negatives, perfect if you plan to convert old collections of film to digital. The 4990 can handle almost any kind of film: slides, medium format, 4 x 5 inch film, you name it the 4990 will scan it. All this would mean nothing if the quality was lacking, but thankfully the performance of the 4990 is outstanding. When comparing the 4990's scans to those from a lower end model the differences were immediately obvious; the 4990 is in another league. Even at resolutions well below its maximum, the 4990 produces beautiful images. Contrast is spot on across shadows and the image is sharp, though the grain is perhaps more prominent than we would like. Should you wish to remove excessive grain the 4990's built in image manipulation software can effectively clean up images, though there is a slight loss of clarity. Scratches can be removed by the excellent ICE technology. We found that both colour and monochrome film produced excellent results and couldn't fault the reproduction. When we compared the 4990's output to a 12 x 16 darkroom print we were suitably impressed.

If you don't want to use Epson's own scanning software, they have helpfully included Lasersoft's SilverFast SE. This isn't quite as easy to use as Epson Scan but offers some interesting touch-up functions. Once you have the images on your computer you can then use Epson's included software packages to touch them up to your heart's content. Epson have included Adobe Photoshop Elements 2.0, a favourite to bundle with scanners. Photoshop Elements is a great, easy to use program and provides all the functionality the average user is likely to need. Optical Character Recognition software is also included in the form of Finereader 5.0 Sprint Plus, a relatively easy to use product. We didn't find any problems when testing it with the scanner.

Overall the Epson Perfection 4990 Photo is an excellent all rounder. It should handle any scanning task you throw at it with ease and produce stunning results. That said, it is expensive and this expense can't really be justified unless you're in need of a scanner with high end film scanning functions. If this is what you want then the 4990 can't be faulted.