A handy (if pricy) tool for pro photographers 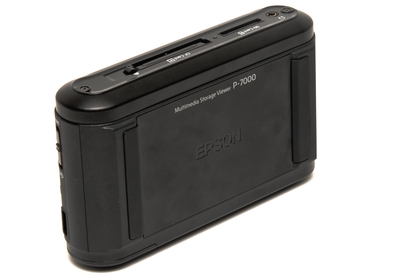 In some ways it's hard to fault the functionality of the Epson P-7000. It's easy to use, has a relatively responsive interface and plenty of storage. However, it's quite expensive. Before you buy, make sure you're serious about your photography and that the P-7000 will better serve your needs than alternatives, such as a cheap ultraportable laptop.

If you bought the Epson P-7000 Multimedia Storage Viewer to watch the occasional video while travelling or to listen to your MP3 collection on the way to work it would probably be a foolish purchase. For the $1000 hit your wallet will take if you purchase the P-7000 you could not just buy an ultraportable laptop with a bigger screen — you could get a decent portable media player as well!

True, the P-7000's 160GB hard drive is large even compared to many ultraportable laptops, such as the ASUS Eee PC 1000H, and there's no denying that this device's 4in, 640x480 resolution screen is gorgeous for watching videos and viewing pictures. (Unfortunately, it is quite reflective in bright sunlight.)

However, the device is quite heavy — weighing around 490g with its rechargeable battery installed — and quite ugly (it resembles an outsized 'compact' digital camera, right down to the navigation pad in the top-right corner). Measuring about 14.5cm wide and 8.5cm tall — and over 3cm deep — it's not something you can easily slip into the pocket of your jeans. This makes it very different to a dedicated portable media player such as Apple's iPod touch.

The easily accessible SD and CompactFlash card slots along the top of the P-7000 give the game away: Epson has designed it as a tool for professional photographers (or seriously cashed-up amateurs). In addition to the card slots, which allow easy backing up of the precious memories you just snapped, the device acts as a USB host. This means you can attach thumb drives, or access photos on a camera's internal memory via a standard USB cable. (Handily, the mini-USB to USB cable you use to attach the P-7000 to a PC can be swapped round and used for this purpose by plugging it into to the full-sized 'host' USB port.)

When we plugged in a Ricoh R8, the camera behaved exactly as if it had been connected to a computer. We were able to use the P-7000 to browse and easily back up all of the photos on the camera, in the process obtaining a number of amusing shots evidently left on the R8 by a forgetful staff member. While browsing photos you can easily view metadata attached to files, such as ISO and shutter speed, and other information (including an image's histogram). Naturally, RAW (including Adobe DNG) and JPEG files are both supported. Images can be given star ratings, and the P-7000 is compatible with programs that support Adobe's Extensible Metadata Platform (XMP) standard.

The P-7000 has a range of on-board photo editing options. As well as basic image rotation, you can apply automatic filters such as People, Landscape or Monochrome. Images can be tweaked manually, too; brightness, contrast, saturation, sharpness and colour balance can be adjusted, and a noise reduction filter can be applied. You don't get the kind of granular control or extensive options you would from a software package like Adobe Photoshop, but it may be enough to do a few tweaks before printing directly to a portable PictBridge-capable printer such as Canon's Selphy CP770. You can even add a watermark to your photos before printing them.

The P-7000 is accompanied by both Mac and Windows versions of Epson Link2 and Epson's 'USB Display Plug-in'. Epson Link2 allows you to copy media files to and from the P-7000, as well as construct playlists. If you have a backup from a camera or memory card on the device that you haven't copied to your computer then Link2 will offer to do it automatically when you start the application. The USB Display Plug-in is compatible with Adobe Photoshop and Photoshop Elements. It allows you to display the entirety of an image you are currently editing on a computer on the P-7000's screen. This lets you use the P-7000 as a 'sub-monitor', and is handy if your main monitor doesn't support as great a colour gamut (according to Epson, the P-7000's display supports 94 per cent of the Adobe RGB colour space).

Epson claims that the P-7000's li-ion battery, which can be recharged using the included AC adapter, is good for approximately 75 full backups from a 1GB CompactFlash card. A wrist strap and pouch are included in the sales package.