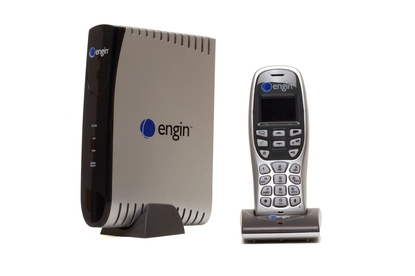 engin's Internet Phone 121 represents good value for money. It allows users to make regular calls, as well as calls over the Internet through the engin service using a single handset.

The key point of the 121 is the fact that it doesn't require connection to a PC to operate. The package consists of two parts, a base station that houses all the connections, and a charging dock, which holds the phone. The 121 is very easy to set up. An installation guide on the included CD-ROM runs the user through the setup process, and this only takes a couple of minutes. An included Ethernet cable runs from a modem or router to the base station (for making VoIP calls), while an ordinary landline (PSTN) connection also plugs into the base station (for making regular telephone calls). Both the base station and the 121's charging dock run off AC power, so you'll need two free power points. The base station also includes a number of green LED status lights to ensure ease of use (LAN, WAN and engin ready).

As the 121 doesn't require a connection to a PC, it offers users the freedom to roam around their home or office while on a VoIP call, just as they would a regular landline telephone. We were setup with a free, trial engin account and were pleased to report that the 121 works quite well. Most of our test calls were fine, although we did experience some occasional poor quality, but this only lasted for a few seconds at a time. Our main complaint was with a soft, yet constant hissing noise that affected all of our calls. Although it won't affect a conversation, it is still something worth mentioning. Keep in mind that downloading from your Internet connection while making VoIP call will more than likely detract from the quality of the call.

One point worth noting is that the quality of service (QOS) of VoIP depends largely on your Internet connection, and this is something most of us have no control over. The quality and overall reliability of the engin service relies on the quality and speed of the Internet connection. Most of our test calls didn't experience any significant problems, although naturally a VoIP call isn't as clear or crisp as a regular landline call.

The 121 phone is fairly straightforward to use, although we weren't impressed with the design. The keys feel soft and they aren't sturdy enough, so pressing them requires more force than usual. The same applies to the rest of the buttons, comprising of two selection buttons, an answer key, a power button (which doubles as a key to switch from landline to VoIP calls) and dedicated speakerphone and recall keys. Unfortunately, the keys aren't backlit, so night time use may be a little difficult.

The backlit, colour screen is quite small, and it isn't very bright either. While we liked the attempt to re-create a mobile phone experience, the text needs to be larger and clearer, as the interface can get confusing. The menu is quite good though, with large, coloured icons and a text description beneath each one ensuring users won't have too many issues with navigation. The phone runs off two AAA batteries and these are included in the sales package. The handset is finished in a rather bland silver and grey colour scheme with prominent engin branding on both the phone and the base station.

engin offers five call plans, depending on whether you are a home or business user, or whether you intend to call internationally. The cheapest plan is $9.95 per month, while the business 50 plan peaks at $50 per month. Each plan offers different call rates and advantages, a full list found here.