Enhance your game without blowing your budget 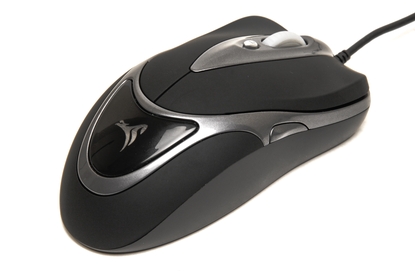 You’ll have to get past the marketing gibberish on the mouse’s packaging, but this is an affordable and reasonable gaming mouse. It certainly isn’t for the hardcore gamer, but the Falcon is a decent option.

Emprex doesn’t have the same reputation in the gaming community as the likes of Saitek or Razer, and the Falcon M883U probably won’t change this. However, this is an affordable and reasonably well-made gaming mouse. With no weight configuration options it won’t suit hardcore gamers, but for those wanting to get a slight edge without going all-out it is a decent option.

The Falcon features a tapered hand grip resembling Razer’s line of gaming mice. The design allows the user to wrap their palm around the mouse while keeping control of the buttons. The symmetrical design also allows the mouse to be used with either hand; however, we found the side buttons rather awkward and uncomfortable to access.

The Falcon has a typical five-button setup, with left, right and middle buttons as well as a button on each side. Using the Falcon’s configuration software, all five buttons can be easily mapped to perform different functions; quick configuration buttons enable easy swapping between right-handed and left-handed use.

The Falcon weighs 120g and doesn’t offer weight configuration like higher-end gaming mice. The mouse uses Teflon feet to minimise friction; combined with the included mouse pad, the Falcon manages to glide rather effortlessly while retaining the necessary accuracy for shooting games.

Saitek and Razer pride themselves on mice capable of tracking at 3200 dots per inch The Falcon has three different sensitivity settings, ranging from the standard 800dpi to 2000dpi. The sensitivity can be adjusted from the mouse itself using a small button.

The middle button’s backlight indicates its sensitivity setting — green for 800dpi, blue for 1300dpi and red for 2000dpi. The accompanying Dynamic Lightshow software modifies this backlight to change colours in time with music the computer is playing; fun but hardly useful for gamers.

The configuration software comes with two gaming macros built-in. The 'Virtual Run' macro increases the mouse’s sensitivity while a button is held. This allows users to turn around quickly in first person shooters, or scroll quicker on the map in a real-time strategy game. The macro works, but we're dubious that it will have a real impact on gamers' performance. The other macro, dubbed 'Wave Action', essentially simulates constantly clicking left-clicking — reasonable if you want to turn a pistol into a sub-machine gun but otherwise useless.

Emprex boasts that the mouse's connector is gold plated, allowing for a better connection than a standard USB plug. The company isn’t the first to make such a claim — Razer and Saitek both do as well. However, the bandwidth that even a gaming mouse uses is still comfortably within the confines of the USB 2.0 specification, making the claim seem little more than marketing gimmick.