An affordable and capable 3G broadband router with nLite Wi-Fi 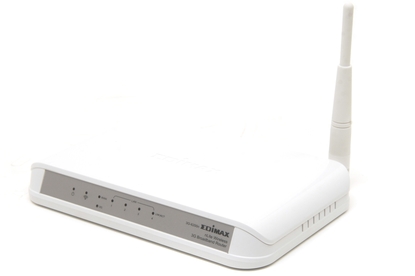 Edimax teams 3G broadband with restricted 802.11n Wi-Fi (nLite) in this affordable device. Don't expect to be able to stream high-definition media, but for Web browsing and light file transfers, this router is a viable choice.

Routers with 802.11n wireless technology are getting cheaper all the time, but you’d still expect to flesh out over $200 for anything decent. While Edimax's nLite Wireless 3G Broadband Router (3G-6200n) may not be a full 802.11n Wi-Fi device, it can distribute both mobile broadband (3G) and cable/ADSL connections over a comparable distance to proper 802.11n routers, and at a usable speed.

The nLite Wireless 3G Broadband Router doesn't use the same Wi-Fi technology found in most 802.11n wireless routers. Instead, it uses the "nLite" technology also found in TP-Link's TL-WR741ND wireless router. This means that although the router is compatible with 802.11n-enabled adapters and notebooks, it will only deliver a maximum throughput of 150 megabits per second (Mbps). That's half of what 802.11n routers can theoretically achieve, but significantly faster than the 108Mbps limit of enhanced 802.11g routers.

During testing, the Wi-Fi router averaged throughput speeds of 4.9 megabytes per second (MBps) at a range of two metres, which is faster than TP-Link's nLite router. We retained a wireless signal at a distance of 15m, but the router had a much slower throughput speed of 1.1MBps

The wireless router offers five 10/100Mbps Ethernet ports, a WPS button, a removable Wi-Fi antenna and a USB port. There is also a Wi-Fi toggle switch, so you can switch off the router's wireless signal without opening the Web-based interface. Because the Ethernet ports are limited to a theoretical maximum of 100Mbps, you won't be able to reach full Wi-Fi speeds when transferring or streaming data from a PC connected via a cable.

The USB port can be used to connect either a printer or a 3G/HSDPA broadband modem; it even supports USB hubs, so you can plug both devices in simultaneously. Unfortunately, this port is next to the power adapter, which makes it difficult to plug in thick or awkwardly shaped mobile broadband modems such as Huawei’s E180 modem. Edimax bundles a short USB extension plug to remedy this.

Setting up a 3G or HSDPA broadband modem

In most cases you just have to insert the modem and configure the broadband provider's access point name (APN) through the Web-based interface. Telstra BigPond customers get a specific page in which they only have to enter their username and password, though we found this was unnecessary when using the Turbo 21. Provided you have the correct APN and any required user authentication, the process is simple — the nLite Wireless 3G Broadband Router attempts to connect to the broadband network until it achieves a secure connection.

When using the 3 Mobile E180 modem in our North Sydney offices, we managed average download speeds of 1745 kilobits per second (Kbps) and upload speeds of 938Kbps using PC World's Broadband Speed Test. The Telstra Turbo 21 modem's average speeds were slightly worse, at 1550Kbps download and 638Kbps upload. Real world speeds will depend on the broadband provider, location and how many people are using the connection simultaneously.

Edimax's nLite 3G Wireless Broadband Router can only distribute one Internet connection at a time, so you will have to prioritise the WAN or mobile broadband connection depending on your circumstances. A WAN Failover feature is also available, so if your 3G connection cuts out, the router will automatically switch to an ADSL or cable modem connection if it can.

The router's Web-based interface lacks options to set up simultaneous wireless networks but the ability to configure a schedule that automatically enables and disables the Wi-Fi signal is handy. Quality of Service (QoS), port forwarding and a basic firewall can also be configured through the interface.

At $149, Edimax's router is a decently priced upgrade from entry-level 802.11g routers, and compatibility with mobile broadband USB modems is a definite boon. The router fills a gap between carrier-locked portable routers like the Virgin Mobile Wi-Fi Modem and fully equipped 802.11n routers like ASUS' RT-N15. For any user who switches between fixed line and mobile broadband services regularly, Edimax’s nLite Wireless 3G Broadband Router is a viable choice for distributing those Internet connections across several computers.