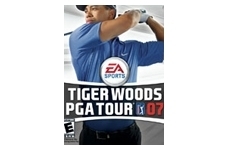 Tiger for the Wii is a lot like the real sport of golf: wonderfully fun and tremendously frustrating. But unlike the real deal, it just isn't always worth the aggravation. Hopefully, they'll bring some of the finesse back for the 2008 model.

For virtual duffers like yours truly, Tiger Woods '07 for the Wii seems like a dream come true.

A hyper-realistic golf game that utilises the Wii Remote to mimic a real golf swing is everything we could ask for in a video golf game. So why are we not impressed by the end result?

First off, it's because the Wii version of Tiger '07 is the least attractive and pleasing of all the available iterations. The features are pretty much the same but the Wii version's courses, colour schemes, and ball physics are lacking. But the real draw here is the Wii Remote's swing system, which is quite accurate, and mimics real world golf mechanics rather well. If you need to smash the ball down the green, then swing hard and fast; if a shot requires a delicate touch, then go slow and easy. You can also flick your wrist to fade or draw your shot.

But as innovative as the swing system is, it has a lot of flaws. Sensitivity is a major issue, and often, the Remote would register a swing even though we haven't actually completed it. Then there's the fact that the ball control options that most virtual golfers have come to expect are missing. There is no percentage meter to indicate your lie and there is no option to change the trajectory of your shot.