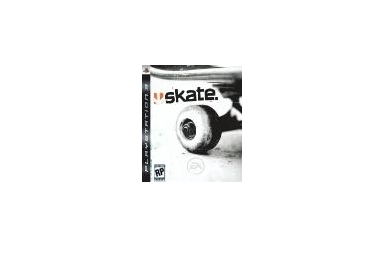 We think gamers who are hungry for skating but tired of Tony Hawk should give this title a try. There are plenty of similarities, but the actual gameplay is unique and enjoyable and will appeal to many.

EA's stab at a skating videogame is enjoyable, addictive and may end up giving Mr. Hawk a run for his money. There's no denying the similarities between the two, but they're only skin deep. Skate's gameplay is markedly different than Tony Hawk -- something that veterans of the latter might really appreciate.

The premise for Skate is a familiar tale and ends up being more of an appetiser than a main course. In the skating world you're a nobody, and your job is to ollie up the ranks and become a somebody. You do this by taking advantage of the hills, skate parks, rails and everything else your city has to offer in order to complete goals such as special tricks or time trials to earn points. All in all, nothing special here.

The really cool things about Skate are in the controls. In a way, it plays like an anti-Tony Hawk because there's more emphasis on subtle movements of the analogue sticks than on button mashing. This makes good timing essential because messing up just one aspect of a simple move like an ollie can leave you face down in the cement. Getting comfortable with these skills takes a little while, but we have to say, you feel more in control of your character. Instead of remembering complex combinations, you need to be quick and alert.

One of Skate's major flaws results from the game's reliance on subtlety. There are plenty of situations that require you to perform a specific trick and it's ridiculously easy to accidentally perform the wrong one. You may find yourself working on the same trick over and over, and if you're willing to do that, it might be time to buy a real skateboard. This is also probably a good time to point out the fixed camera, which at times seems hell bent on giving you bad angles at the most inopportune times.

Skate also looks great; not as good as Proving Ground, but still great. The cityscapes are a little less dense and intricate, but they still look good enough to give you the sense that you're involved in the game and there are more than enough objects to perform tricks off of. Skate also offers its fair share of skating pros to liven things up.

While the search for money and recognition is the driving force behind this game, there are plenty of side challenges to divert your attention. There's also more than ample opportunity for skating around the city and just messing around; which may actually be the most fun aspect of the game and makes us wonder if these games even need set goals.