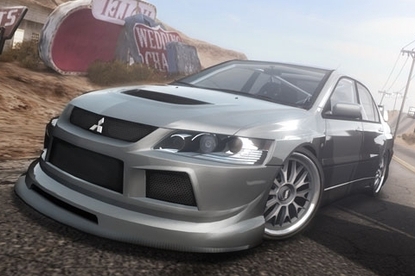 The latest chapter in the Need For Speed franchise trades in the high speed chases, midnight races, and adrenaline-soaked sense of adventure of past titles for legally sanctioned events and high noon showdowns.

But don't let the conservative shift throw you -- ProStreet packs in the same quality racing that you've come to expect from this lauded franchise. The most immediate difference between ProStreet and its predecessors lies in its graphics. This is the first Need for Speed game to sport truly next-gen visuals with gorgeous vehicle modelling, spot-on damage rendering, and a general high-level of detail. Unfortunately, all this visual flash comes with a price: the game features a ridiculous amount of logos, advertisements, and various other graphics on the screen, not to mention obnoxious announcers who sound like they belong more at a frat-boy kegger than at a competitive street racing event.

ProStreet also does away with the open worlds of previous Need for Speeds and replaces them with a branching career mode. As up and coming street racer Ryan Cooper, your ultimate goal is to take on the kings of four racing modes: grip, drift, drag, and speed. Successfully usurp their spots and you're free to challenge the street king to become the top racer. It's a long road to the head of the class though, as ProStreet packs in one of the longest careers in the franchise with tons of races, venues, and vehicles.

There is a tremendous amount of depth lurking underneath ProStreet's hood. Aside from the long and rewarding career path, in which you take a series of races towards your ultimate goal of the street racing throne, you can take your sled to the garage and customise it with a slew of part upgrades and the autosculpt feature which enables you to shape individual components to your liking. You can also creating custom blueprints for vehicles and share them via Xbox Live; leaderboards track the success of shared blueprints and unlock certain achievements for you.

ProStreet also takes online play to another level with plenty of new venues and race types, as well as a slick new system that makes it far easier to actually socialise with your fellow racers. The online modes are solid and the ability to set up virtual race days that your buddies can enter on their own schedule offers a lot of flexibility. The system is so intuitive that I was left to wonder why it hadn't been done before.

But the outstanding online gameplay is just one item on a long list of reasons to play ProStreet. The great visuals, solid racing mechanics, lengthy career mode and customization options help make this one of the most deep and enjoyable racing titles around. Even if the title's new direction doesn't jive with you, there's no denying that the level of polish inherent in this slick racer.