BioWare CEO Dr. Ray Muzyka and the game's executive producer Casey Hudson have repeatedly asserted that this is the trilogy's "dark second chapter" 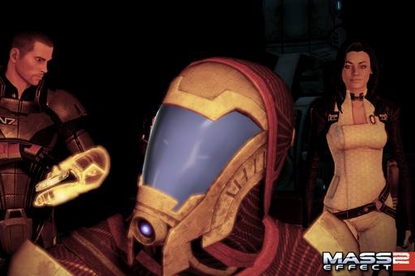 An improvement on just about every aspect of the original game, with the exception of one tiny aspect; the very final battle. Mass Effect 2 sees BioWare's approach to the role playing genre evolve beyond anything they've worked on previously, and gives us a glimpse of how both RPGs and shooters will begin to merge in the years ahead.

It took me 28 hours to beat Mass Effect 2 on my first run through, and I think it's safe to say that for more than 27 hours of that experience I was, for the most part, elated. Before I dig into what makes it such an enjoyable ride, I think it's worth addressing the score right here at the beginning. The half-point lopped off the top is due, almost entirely, to the game's climactic battle and my entirely subjective response to it. It's difficult to address directly without spoiling an important part of the narrative, so forgive me if the following seems a little vague but the bottom line is that it's just preposterous. Yes, I know this is science fiction, but the whole thing is absurd when you really think about it -- for approximately 27 hours and 40 minutes the game builds beautifully towards something epic but the climax, the glorious denouement, is so inexplicably and almost comically absurd, I couldn't help but feel a little betrayed. Part of the strength of the entire Mass Effect franchise is that there's a credibility to its fiction.

Whether it was the first game, or the three subsequent novelisations, the iPhone game, or the enormous amount of information that appears in the game's codex about characters, races, politics, weaponry, and technology, it's all fundamentally credible. Yes, there are some weird-looking wobbly aliens that occasionally rear their ugly heads to remind us that this is pure fantasy, but when it comes to motivation, the story has always kept its integrity. My issue with the conclusion of this particular chapter in the planned trilogy is that, for a relatively brief moment, this narrative rectitude is set aside purely to give gamers something big and disposable to shoot at. Make no mistake, the whole sequence is a truly spectacular piece of game design, and it's an exciting fight that's wonderfully executed -- it's just that after all of the preamble, all of the exposition, and all of the effort to bring everyone together, it feels wholly unnecessary. It's a classic problem for the second episode of any narrative trilogy, but in this case I really do wish that BioWare had looked to one of their obvious inspirations for the franchise and realized that there's a very good reason why nothing exploded at the end of The Empire Strikes Back.

But everything leading up to that ending is exquisitely executed. It's made perfectly clear from the very beginning of the game that bad things are happening in the universe, and that for some reason (presumably his exposure to Prothean technology in the first game, though it's never fully explained) Commander Shepard is singled-out as the man. Raised from the dead by a questionable organization led by the devilishly imperialist Illusive Man (voiced with menacing verve by Martin Sheen) and charged with putting together a dysfunctional intergalactic version of the dirty dozen, Shepard is cast as a far more complex character than we've seen previously. While he (or she, if you choose) is still judged on his virtues throughout the experience, he's fundamentally a much more cynical and uncompromising figure this time. Gone is that sense of black and white binary morality that the first game asserted: instead, there's a need to operate very much within a moral grey area.

Rather than picking up weapons on the battlefield, Shepard can improve his squad's equipment through judicious management of research and development in the Normandy's tech lab.

BioWare CEO Dr. Ray Muzyka and the game's executive producer Casey Hudson have repeatedly asserted that this is the trilogy's "dark second chapter," and Shepard himself is the perfect embodiment of that. This element of inherent cynicism serves the story well, as it allows the hero to approach his quest with a single-mindedness that's evocative of Keifer Sutherland's Jack Bauer, or (if you're a sci-fi geek) Ben Browder's mischievously dark John Crichton from Farscape. He stares down bad guys, head-butts aliens twice his size, and uses his reputation as a war hero to bend the rules. Despite these comic book hero shenanigans though, he is a fundamentally credible character. When others reveal their respect for him, it rarely seems forced or clichéd, and when companions decide to join him, there's a tangible sense of camaraderie that feeds back into the overall integrity of the experience.

Shepard isn't alone as such a believable presence. All of the companions are similarly plausible thanks to some great writing and excellent performances from the voice talent that brings them to life. Much like the core characters in Quantic Dream's Heavy Rain on PlayStation 3, their effectiveness comes from their deeply flawed nature, and everyone here is very clearly haunted by something. Managing the interwoven relationships of your motley crew requires an understanding of their feelings of inadequacy, anger, weakness, or guilt, and tangible bonds of trust (or betrayal, if you mess it up) are formed in such a way that by the time you reach the final battle there's a genuine sense of concern as to whether everyone is going to make it, and whether the decisions you have made will keep them motivated enough to stay alive.

Some might argue that scanning for resources is more 'work' than necessary but a nice side effect of thorough exploration is that you'll find 'anomalies' that reveal extra missions and narrative threads.

The game is essentially divided into three distinct acts, though the first two have a huge amount of overlap due to the freedom that its role playing roots afford it. Fundamentally they concern recruiting the eclectic band of renegade brothers and sisters, winning their loyalty, and then convincing them all to accompany Shepard on a retaliatory suicide mission against the game's primary bad guys. I say primary bad guys, as Mass Effect 2 weaves numerous stories together that expose the darker and more sinister aspects of BioWare's universe. At the top of the heap are the insect-like Collectors, an enigmatic race that was first introduced in Drew Karpyshyn's Mass Effect: Ascension novel in 2008. They're the ones responsible for Shepard's "death" at the beginning of the game, and the for the disappearance of human colonies around the galaxy. While they're the biggest threat in the game, they're certainly not the most prevalent. Shepard and his crew will also take on the Geth, multiple mercenary factions, criminal organisations, angry Krogan clansmen, and an assortment of unpleasant alien creatures, including that huge one that showed up in the cinematic trailer for the game.

There's a lot to take in throughout, but part of the beauty of Mass Effect 2 is that in almost every regard it reflects the dichotomy of BioWare's approach to game design in recent years. On one hand it's a fast-paced action game that bears little resemblance to anything we might have seen in the role playing genre previously, while on the other it's an incredibly complex narrative that requires a huge level of commitment from the player in order to fully appreciate it. While truly understanding everything that's going on isn't strictly necessary to enjoy the experience, it certainly makes it richer. You're not missing out if you've not read the books, or you haven't dug into any of the associated media, but the nature of the game's storytelling is such that it has a lot more impact if you're paying attention. Returning characters tend to be reintroduced very casually with no fanfare, leaving any sense of gravitas entirely up to the player. It's a very respectful approach to story development with a lot of -- here's that word again -- integrity.

Just so you don't get too wrapped up in the emotional drama that runs throughout the game, it also throws plenty of obviously very alien monsters at you.

In a lot of ways, this game may very well be a glimpse at what Gears of War creative director Cliff Bleszinski was talking about last year when he speculated on the evolution of the shooter genre. Mass Effect 2 builds on its predecessor's party-based approach to combat, but brings it closer to contemporaries like Ghost Recon: Advanced Warfighter and Rainbow Six. As such, it's entirely possible to approach most of the experience as a stop 'n pop shooter with some lengthy story portions and occasional resource management requirements. That said, the game isn't entirely about shooting stuff, and there are a number of imaginative missions in which Shepard must keep his weapon holstered. For the most part, these concern performing "favours" for newly recruited companions, and require more of an investigative (and in one case seductive) focus. Several of these missions take place on the Citadel, where much of the first game took place, but reveal very different areas of the vast space metropolis. Though relatively brief, I found all of these non-combat excursions to be a welcome relief from the constant bursts of automatic weapons fire. Not only did they flesh out the characters concerned with each chapter, but they also served to make the story seem more grounded and real.