EA Games Harry Potter and the Order of the Phoenix 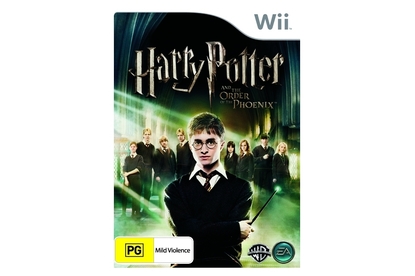 Harry Potter and the Order of the Phoenix is typically average for a licensed game. The addition of the wand controls edges it above mediocre -- but only barely.

With the release of the Wii version of Harry Potter and the Order of the Phoenix, I thought I had finally gotten my chance to attain wizardhood, or to get as close as possible without actually moving into Hogwarts.

After all, the game's main draw is the ability to wave the Wii Remote around like a wand, firing spells at Slytherin goons, throwing objects across rooms and generally running amuck.

Repeat After Me: Swish...and Flick!

But instead of fulfilling my wizardly aspirations, Order of the Phoenix fizzled out like a poorly cast spell. The excitement of waving your wand just isn't there, most notably because you're stuck casting the same spells at the same things, over and over again, ad-nauseam. The gameplay, which runs in the GTA-like sandbox vein--with you controlling Harry while Ron and Hermione trail behind--is engaging but ultimately disappointing as . You're given the freedom to explore Hogwarts and complete tasks. Mostly, this consists of the most mundane uses of magic you can imagine. In a story that is rich with evil wizards murdering people and devious political machinations, being relegated to fixing pots and cleaning hallways strips away much of the glamour in waving a wand.

Speaking of which, the wand-waving motions are relegated to simple up, down, circular or back and forth motions, so while Harry had to be precise with his "swish and flick," you simply get to flick and see what happens. It also doesn't help that wand-aiming is spotty: more often than not, you'll be casting blindly. For a main feature, it sure is underwhelming.

It's painful to see J.K. Rowling's wonderful story become so disjointed and rushed, but of course, licensed video games are almost never about the story and almost always about cashing in on the license's popularity. For diehard Potter fans and those who walk away from the movie with stars in their eyes, the game will hold some value, especially in the unlockable videos and interviews with the cast and staff members of the movie and games. However, the rest of you Muggles should definitely stick to the novels and the power of your imagination to get you in a magical state of mind.