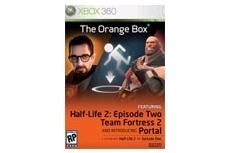 Valve's done an amazing job with Half-Life 2: The Orange Box, and it shouldn't let down any fans of the series with its slick presentation, great game play variety, and entertaining stories.

You want to talk about getting your money's worth? Take a look at The Orange Box: not only do you get Half-Life 2 and the two episodes, you also get Portal and Team Fortress 2. For first-person shooter fans, it doesn't get much better than this.

What's even better is that each individual game runs amazingly well on the Xbox 360. The graphics are amazing as is the presentation. The interface that Valve created for navigating through the content is also wonderful. You can easily choose a game from the main screen, play for a bit, exit out and jump right into something else. A useful auto-save function keeps tabs on your progress so you don't have to worry about losing any of your hard work.

As for the games themselves, we'll skip Half-Life 2 and Episode 1, as they have been covered elsewhere (they're still awesome, by the way) and stick with the three new titles -- Episode 2, Team Fortress 2 and Portal.

We wish we had the space to go in-depth on all three games; in fact, each deserves its own separate review! But since space is at a minimum, we'll just say this: they're all awesome in their own right. Episode 2 delivers more of the same action that we saw in the original and Episode 1. It's a great continuation of the storyline and it will no doubt satisfy diehard fans who have been waiting to continue the adventures of everyone's favourite quantum physicist turned warrior, Gordon Freeman.

The online FPS Team Fortress 2 is also a winner with its unique cartoony visual style and its finely tuned game play. It doesn't weigh you down with a billion class options and focuses instead on just simple fun. It's a great counterpart to the serious sci-fi battles of Halo 3 and should attract its own fan base in short order.

Lastly, we have Portal, which is easily one of the most creative, mind-bogglingly addictive games we've ever played. You start out as a test subject taking part in an experiment put on by Aperture Science Laboratories. You are tasked with overcoming puzzles using portals. The portal system sounds almost too ambitious for its own good: first, you create a blue portal on a wall, floor or ceiling. You then create an orange portal in another location. Walk, jump or fall through one portal and you'll end up coming out of the other.

Amazingly enough, this system has zero flaws. The difficulty ramps up well and while the later stages do get fairly complex, there's (almost) nothing impossible in Portal. What's also surprising is that Portal has a fun storyline which features some genuinely witty writing. Although it only weighs in at three to four hours, Portal is one of the biggest attractions in the Orange Box, managing to steal its fair share of the spotlight against the other amazing content with its ingenious premise and superb design.

Bang for your buck

Before we end this review, we have to just point out some minor quibbles with the game. First, we feel that the Gravity Gun is an awesomely innovative tool in the Half-Life series, but for Episode 2, we had hoped that Valve would address the fact that carrying around a large object obscures your vision field. Another nit-pick: while The Orange Box has a lot to offer, some of the new games are a bit too short, particularly Portal. A game this good deserves far more than an all-too-brief four-hour play time. That's not to say that those four hours aren't incredible but that the experience is over far too quickly.

But beyond that, there is nothing bad we can say about this package. The fact that you get five games is awesome. If you divide it out, you're essentially paying $10 for each game, which is an incredible bargain.