FIFA 13 by EA Sports for iOS

It may not be as fluid as the console version, but FIFA 13 for iOS is a great mobile option for soccer nuts 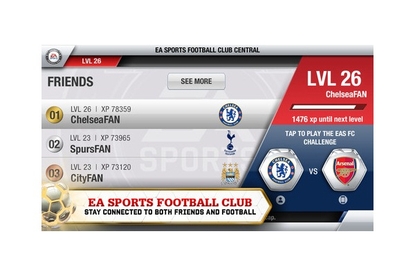 For commuters, travellers, or those who don’t wish to invest in a console, FIFA 13 by EA Sports for the iPhone is a justifiable substitute. It offers multiple game mode options, as well as the fan favourite, FUT.

While it cannot mirror the quality of the gameplay and the graphics that are offered by the console version of the game, EA Sports' FIFA 13 app is a sufficient substitute when away from home. It includes most of the major game modes, as well as multiplayer. However, the controls don’t provide the same level of freedom on the phone as they do on a console.

The FIFA 13 app features a Quick Match menu, which then allows you to select between Kick-off, Practice, and Penalty shoot-out. There is also a gamepad option, which gives you the ability to use the iPhone (or iPod) as a controller for the iPad version of the game.

Ultimate Team (FUT) is also available in the FIFA 13 app. It has all the functionality of the console version of FUT, including trade and store. The last mode, apart from the Online option, is Career, which includes Tournament and Manager playing modes. Unfortunately, you can't make your own pro player on the app.

The app does not share content (such as game mode saves, Ultimate Team, and other features) with the console version of FIFA 13, which means that you can't continue your console career through the app and vice-versa. Your account does link up though. As a result, any experience earned by playing the app version adds to your overall level within FIFA.

While the FIFA 13 app may not be able to compete with the freedom, flow, and freestyle nature of the console version of the game, it offers an exceptional mobile experience. EA Sports has done well to minimise the amount of controls present on the screen, meaning that your fingers remain in the bottom left and right corners rather than covering the majority of the screen. It has transformed the dozen plus button variations available in the console version into just four small buttons and swipe motions alongside an 'analogue stick'. Player movement is fairly smooth, although executing effective dribbling can be difficult due to player turns feeling too rigid.