Command & Conquer has had a long history of great moments and the Red Alert games have probably been responsible for most of them. 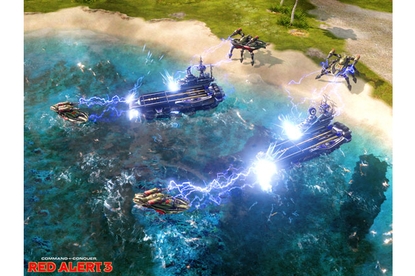 Red Alert 3 is a good RTS, but lacks some of the zest of its predecessors.

Command & Conquer has had a long history of great moments and the Red Alert games have probably been responsible for most of them. The latest Red Alert tries to emulate its lofty predecessors, but gets bogged down on some curious design choices and the archaic gameplay may turn away some.

I've had a long sordid love affair with the Command & Conquer series. The original was the first real time strategy game that I got my hands on and remains one of my favorite games of all time, but it goes without saying that the series has been in a long slow decline with only one or two standouts. The best of these was the second Red Alert, which got all the elements right and was one of the best games in the genre during the first few years of the decade. The sequel therefore has a high standard to maintain, and while the game does provide a good basis for entertainment it doesn't quite reach the lofty achievements of its predecessor and as a result might disappoint some fans.

Most will be familiar with the overall plot of the Red Alert series - an alternate history in which Adolf Hitler has been killed by a time traveling Albert Einstein intent on stopping the horror of the Second World War. The resulting timeline is little better resulting in a different world war between the Soviet Union and the western allies, the third game picks up as this war is just ending with the Soviets on the losing side. To reverse the losses the Soviets engineer their own changes by assassinating Einstein. The result isn't what is expected, for while the results of the first two games are erased, the outcome is worse. Another world war rapidly emerges, this time with a third side introduced — the Empire of the Rising Sun — a well done parody of militaristic Japan. Throughout the plot is conveyed via tongue-in-cheek full motion video. More than a few well known actors are involved, including Tim Curry, J.K. Simmons, and George Takei.

The majority of the gameplay is involved with the three story campaigns, one for each of the factions. In a new twist to this version is the ability to conduct each mission in coop with a friend, or if that isn't possible, with a friendly AI. Players will do well to get a friend involved however, as the friendly AI isn't the best companion, often unable to accomplish simple objectives or throwing a mass of units forward to defend a position at a mere dribble — the effect of which is to render you largely alone against the hostile onslaught. While this isn't very important during the majority of the missions, in some of the larger difficult missions it readily becomes a problem. The missions themselves are a good mix of classic C&C mission archetypes — commando raids, stand up fights to capture research stations, and lengthy defensive battles until overwhelming reinforcements can arrive. Each of the three campaigns is nine missions long, and should on the whole offer around ten hours of gameplay for each faction.

For each of the sides there has been some significant changes. This time around one of the central focuses is on naval combat. In contrast to previous games nearly every structure is able to be built on water and the number of naval units has been suitably increased, each side having a good mix of submarines, frigates, destroyers and larger capital ships with many of the smaller ones being amphibious. That said naval warfare has never really been a strong suit of the genre and while the attempt is admirable, it's still no more than an enhanced sideshow. The real focus of course in on land warfare. It's still fun, no doubt, but it really lacks some of the panache that was seen in the second game with a more subdued tone.

Anyone who has dabbled in the previous games will have a basic grasp of the two returning sides, changes aside they play largely the same as they did in previous games. The Soviets are a tank heavy side, with their units and unlocked abilities frequently relying on brute strength — one special ability for instance uses orbital trash to pummel targets. The Allies in contrast are more defensive oriented and reliant on infantry and lighter vehicles. Many of their vehicles and buildings can be customized to some degree by placing infantry into them and thereby giving them a boost to damage against specific unit types. The real big change this time around is the introduction of the Empire of Japan faction. They show a real contrast to the other two sides. Since many of their units are able to transform - their primary AA unit can turn into a helicopter for instance - they can excel at creating a relative small number of hi-tech units and using them to quickly create opportunities that can't normally be exploited by small forces of the other two sides. Additionally the Empire can expand much faster than the other sides as all of their structures emerged from their construction yards as hovering prepackaged buildings that can be rapidly sent across the map to establish outposts. The introduction of the new faction is, on the whole, well done, carving its own unique niche into the game which should be taken over by those looking for a more complex, micromanagement friendly faction than is offered by the other two sides.

The game itself also manages to hold onto the emphasis of somewhat farcical tone that was set in the second game. Like the second game, many of the missions aren't conducted in rather ho-hum areas, but highly visible and attractive locations such as Pearl Harbor, Brighton Beach, and a former Soviet missile base turned into a amusement park to name just a few. To an extent this is also brought over to unit design as well, and it proves just as effective. You'll never get the feeling in Red Alert 3 that each side is just a cookie cutter faction similar to others in all but name, one of the major strengths of the game and what will probably allow for a fairly vibrant multiplayer community.

Red Alert 3 is a game that occupies a comfortable niche in the genre, and by now the game is probably getting a little too comfortable. It's been a long time since we've seen more than a small amount of improvement in the basic C&C formula and by now its getting a little long in the teeth. Red Alert 3 is by no means a bad addition to the Red Alert series, but compared to its forebears it lacks much of the panache the series held and may hold some disappointments for fans despite the addition of a good new faction and a fairly satisfying single-player experience.