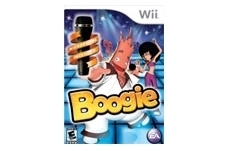 If you can get past the whole 'casual game' stigma, Boogie will give you one of the best gaming experiences on the Wii yet. Anyone who enjoys games like SingStar and Guitar Hero is going to fall in love.

Get out your dancing shoes and warm up your throat: Boogie for the Wii is finally here and it rocks!

After nearly a year I'm starting to learn my lesson when it comes to gaming on the Wii: don't play on hard wood floors wearing socks, it will not end well. Aside from a few slips and falls, Boogie is a fun experience that had me ready to join the pros at the Karaoke bar down the street.

Don't Rain On My Parade

Boogie is big on atmosphere and it plays out as the game's greatest strength and weakness. The cartoon visuals are fun without being too childish and the soundtrack for the game is composed of music from the 60's up to modern day. Every track got me up and dancing but the problem is the good times end there. I beat the story mode in a couple of hours and while I enjoyed every moment of it, I got squat for my efforts there were no unlocked characters, no fire works and no balloons, just a few crummy new outfits and some money that can be used to, wait for it, buy more outfits and unlock a handful of songs.

Thankfully, for the short time that Boogie lasts, the game is fun to play. Controlling your characters is fluid and accessible so you actually enjoy busting out the ridiculous dance moves that the game requires. But again, I ran into a problem: there just isn't much depth to the whole thing. You just swing your hand in time with the music and watch your character pull off silly dance moves. There is a simple combo system, and the ability to pull off special moves, but the challenge just isn't there.

To be fair, Boogie is obviously not meant to be an especially hard game and the simplistic gameplay means it will be more accessible but hardcore gamers may balk at the game's low difficultly.

Hang it on the Fridge

But as fun as the dancing portion is, it's the singing half of the game that really started to shine for me. I simply forget that my neighbors were probably plugging their ears from the ruckus and belted out the hits as loud as could. The mechanics of singing are as simple as the dancing it's so simple that you can basically speak the words and still pull off combos but I found myself enjoying the experience anyway, as did my Pug who sat and watched my performance intently.

After each song is over, you have the option to edit the footage and make it into a music video. The only shortcoming is that when you're finished, all you can do is suffer through your performance again. I love a good chuckle as much as the next guy, but there's only so many times I can listen to myself butcher "Girls Just Wanna Have Fun" before I lose interest. Yes there are some neat effects and lenses to view your video through kaleidoscopes and floating hearts, for example but just I couldn't find a reason to waste my time making them. It would have been an interesting feature if you could upload the videos online and let people watch them but that option just doesn't exist here.

Despite, this, Boogie is a fun and accessible experience that almost anyone can get into. Like most games on the Wii, this title is best experienced with a room full of friends and it should be a hit with younger gamers especially.