With Infinity Ward's Modern Warfare 2 being regularly victimised by bugs, glitches, hacks and other exploits, there's an opportunity for another game to come in and do some real damage 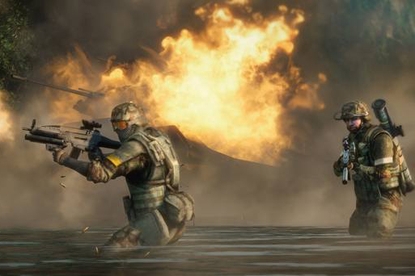 A new challenger has appeared to stake its own claim on the modern warfare throne -- Bad Company 2 has the firepower to knock Call of Duty off its lofty perch. Read on to see why EA and DICE's latest effort just might replace Modern Warfare 2 as your FPS of choice.

Two members of my squad have taken too long to radio in our extraction, and the third just impatiently ran off into the storm in search of them. I am alone on a mountainside and can barely see the encroaching enemies through the fog of snow. I have to get farther down and find my team, but the frostbite is starting to overwhelm. My desperate dash to the nearest hillside house slows as my body begins shivering violently, and my vision is fading under a veil of ice. Just as things start going dark, I burst into the house, put a few bullets into its armed occupant and cozy up to the fireplace. My eyesight returns to normal and I'm quickly back outside in the cold, zigzagging from one warm spot to the next, all the while evading enemies.

This moment, which I experienced during a mission in Battlefield: Bad Company 2, perfectly demonstrates why the game is so interesting: it offers a unique and varied take on established FPS genre conventions. In any other game, I would expect to simply run-'n'-gun my way out of a situation like the one I detailed above, so Bad Company 2's unexpected emphasis on survival skills caught me completely off guard. The radical change in pace forced me to think and react differently to the situation than I normally would, and it made for an incredible experience. The best part is that there plenty of other instances like this throughout the game: racing an ATV through a town full of heavily-armed enemies; sniping enemy sentries with a sniper rifle while using the sound of thunder to mask my shots; and blowing the walls out of a building and watching it crumble on top of your enemies -- it's the moment-to-moment excitement of each mission, helped along by the cool and unique objectives, that gives BFBC2's campaign an unforgettable edge.

The core storyline, however, does a poor job of grabbing you. It isn't that it's bad but rather that it basically boils down to four dudes cracking jokes about cheerleaders while shooting the terrorists behind a World War III plot. It works best if you treat it like an action movie; the comparable example that immediately springs to mind is Die Hard: The heroes end up in a situation so crazy, it's practically improbable, but their badass attitudes, loud mouths and itchy trigger-fingers make it worth experiencing anyway. Taking advantage of that simplistic formula, Bad Company 2 pushes the story into the background, meaning it occurs around the action instead of getting in the way of it.

Where it really stumbles is in its reliance on clichés. For instance, your squad is comprised entirely of been-there archetypes like the explosions-obsessed Haggard and the nerdy tech-specialist, Sweetwater. Neither, however, holds a candle to their cigar-chompin' Sergeant: He is not only minutes from retiring but is, as they say, too old for this shit. Like they were in the previous game, they're a predictable lot, but with the help of some solid writing, the squad's deprecating, goofy and profane rapport is genuinely funny. As you progress through BFBC2 you'll also see that they're not as one-dimensional as you originally thought: Sarge grows increasingly agitated about being prematurely brought out of retirement, and Haggard is a big ol' softie.

I also appreciated that the campaign isn't merely a primer for the multiplayer. Yes, the skills you gain during the solo romp will transition over when you hop online but it's an entirely separate entity. It's also remarkably similar to the first Bad Company which, in this instance, is a good thing. It surprised me how familiar everything felt to the first Bad Company, but I quickly realised that BFBC2 isn't trying to reinvent the wheel -- it's merely changing to tires with a better tread. So, rather than bombarding you with oodles of new game types, developer DICE has fine-tuned and modified the familiar favourites to cater to their established fan base.

This is especially evident in the online modes, where the little enhancements not only reinforced what I liked about the original but offered several new ideas to chew on. Where the control point-capturing Conquest mode has been the series' trademark for nearly a decade, Rush is quickly becoming the mode I most expect other multiplayer games to latch onto and players to gravitate toward. Conquest gives two teams the same objective -- hold control points the longest and wear out your enemy's reinforcements -- but Rush puts different layers of stress on a team depending on their objective. Defenders passively wait behind mounted guns or atop vantage points to prevent the struggling offence's efforts to advance.

On the other hand, the attackers always have the opportunity to progress, causing the defenders to frantically retreat to new positions when the explosives are successfully detonated. While similarly structured to Conquest, the push-push-push mentality of constantly destroying enemy control points keeps Rush matches moving along at a quick and satisfying pace. Good thing, too, because the maps are humongous. Areas expand as you destroy their control points, but smart design decisions keep things from getting too messy. As a new sector opens, the last one closes and keeps you focused on going forward. The smaller Squad Rush mode, however, shrinks things down to 4v4 and eliminates the availability of tanks and helicopters. This significantly amplifies the intensity by forcing you to rely on your small team to attack or defend a wide-open area. All of this makes for big, intense, awesome, easily digestible multiplayer matches.

I was only able to sink four hours into these multiplayer modes during EA's prearranged sessions, and while this brief window isn't quite the same as playing against "regular" players after the game's launch, I was impressed with what I saw. I became hooked on BFBC2's multiplayer not just because it's a great shooter, but because it is instantly rewarding. Everything you do -- and I do mean everything -- earns you experience points. High kill-counts bring in the big points, but I grew fond of playing support roles to nickel and dime my way to the top. Defibrillating dead teammates back to life, dishing out boxes of ammo and repairing battered vehicles contributes a considerable amount to earning promotions and earning new weapons.

That the customization doesn't reach the standard set by the similarly satisfying Modern Warfare 2 will likely discourage genre pros, but the list of unlockable guns for the snipers, medics, engineers and balls-out assaulters is seemingly endless. The massive maps and wide variety of combat options also contribute to the fun. I had a blast airdropping across enemy lines, flying choppers, mowing enemies down from a mounted turrets and using the destructible environments to my advantage. The spectacular explosions that accompany tank shells punching concrete also have a drastic effect on the way you and your opponents interact with the world, so obliterate with caution and care to exploit the built-in physics effectively.

With Infinity Ward's Modern Warfare 2 being regularly victimised by bugs, glitches, hacks and other exploits, there's an opportunity for another game to come in and do some real damage. Bad Company 2 definitely has the necessary chops to give the current king of, well, modern warfare, a run for its money. Aside from its limited weapon tweaking, it hits on all of the same high points as its biggest competition but does it with a style all its own.