The Dyson AM02 Tower fan offers the ultimate in portable fan chic, but it comes with a cool price tag 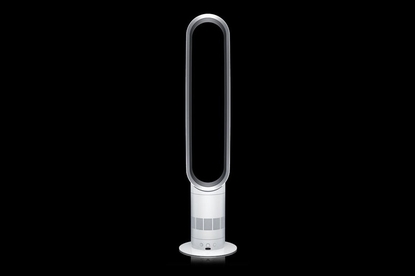 The Dyson AM02 Tower Fan is a bladeless fan that generates a smooth and uninterrupted airflow. Its stylish design, and sleek looks will turn heads, and it provides precise power control over the airflow. If you need to place a portable fan in a room with small children or pets, this is highly recommended, plus it's very easy to clean.

The Dyson AM02 Tower Fan, from design masters Dyson, has had many people in our office rubber-necking and raising eyebrows — just look at the product pictures to see why! Following on from Dyson's Air Multiplier (25cm), which was released in 2009, the latest edition to the Air Multiplier range looks pretty darn cool (and does a good job of keeping you cool), but it comes with a hefty price tag of $599.

So what will $599 get you? Well for starters it’ll get you the fanciest fan on the Australian market. It will also deliver a smooth, uninterrupted air flow air flow without the danger of decapitation from those archaic bladed fans of yesteryear.

The Dyson AM02 Tower Fan works in the same fashion as the original Air Multiplier: air is drawn in from the surroundings and it's forced up through the base by an impeller and out of tiny holes all around the tower's 'wing'. The Dyson AM02 has a 20L per second air intake through the base of the unit. The air is then dispersed evenly up through the ‘airfoil-shaped ramp’ where it is then forced through a 1mm annular aperture or in layman terms – a really, really small gap at high velocity, resulting in a powerful air flow. Surrounding air is also inducted into the fan's flow. The original Air Multiplier had a multiplier rate of 15x, while the new AM02 has a rating of 16x, so it's a little more powerful.

As for controls, the AM02 ships with a remote control, but it also has buttons on its base. A ‘dimmer-switch’ allows for precise and variable control of the air flow, rather than conventional and somewhat limited buttons that are found on most bladed fans, which restrict you to only a few settings. Next to the dimmer switch is a button for controlling the fan's 90 degree oscillation range, followed by the power switch. The Dyson AM02 Tower Fan has an LED display for use in the dark.

We were impressed by the power of the Dyson AM02; it really did a good job keeping us cool. However, it is a slightly noisy fan, and we found it to be noisier than a conventional bladed fan. Indeed, when the Dyson AM02 was set to its most powerful setting, it was the type of loud you wouldn’t want sitting next to you on a hot summer's day while you’re sprawled out on the couch watching TV. In a way, the dimmer-switch is almost like a volume control: the lower the setting, the quieter it runs.

Noise issues aside, the Dyson AM02 is a great fan. We appreciate how easy it is to clean; since there are no blades to get dust caked-on, there’s no fiddling around with removing cages and screws and the like. Simply wipe it down with a micro-fibre cloth or a tissue and you're done. The absence of blades also makes it safe for kids, and we know what kids like doing best; putting their hands in spots they are not meant to touch. Similarly, inquisitive cats need not worry about having their whiskers trimmed -- the Dyson AM02 Tower Fan is feline friendly. A downside to the lack of blades is the fact that when you speak into the AM02, you no longer get that cool fan voice..sigh..

If you need to replace your old and rattling bladed fan, and are lucky enough to have $599 to spend on a portable fan then consider the Dyson AM02. It is a powerful device, with a very stylish design, and it offers greater and more precise power control than a conventional bladed fan. Plus it's safe to have around animals and children who might bump a portable fan over, and it's very easy to clean. Unfortunately, and this is the only problem we have with it (apart from the high price) is that it is rather noisy when on its maximum power setting.