A GSM mobile phone with the ability to run two SIM cards simultaneously. 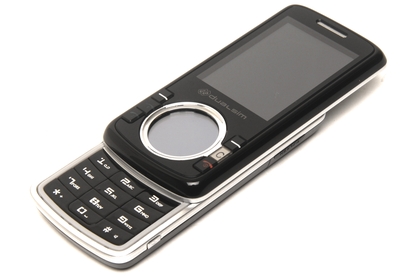 The DualSim Slider will appeal to people who use multiple SIM cards. Unfortunately, the Magic Touch pad control system is frustrating to use and build quality is questionable. It's reasonably priced, though, and does a relatively good job with its dual SIM card functionality.

According to the company behind the DualSim Slider, it is the first mobile phone available in Australia to support the use of two SIM cards simultaneously. Unfortunately, it is let down by a mediocre "Magic Touch" control system.

DualSim claims more than 5 million Australians have two SIM cards, either switching them in and out of one phone or owning two active handsets. The DualSim Slider is designed to make life easier by allowing the use of two SIM cards simultaneously in one phone. This method works quite well, and it allows you to make and receive calls and send and receive text messages from both SIM cards. For calls, there are two call centres, one for each SIM card, while for messages there are two inboxes — labelled SIM 1 and SIM 2.

The home screen displays both networks and has two signal strength indicators in the status bar. Conveniently, the DualSim Slider integrates the phone number listings of both SIM cards into a single phone book.

Call quality is not outstanding. Outgoing audio is loud and clear, with little complaint from our callers, but incoming audio wasn't as loud as we hoped and it does lack clarity. The hands-free speakerphone also suffers from the same problems — it’s a struggle to hear, even at full volume.

The design of the DualSim Slider is a mixed bag. The body is largely gloss plastic, which in addition to attracting plenty of grubby fingerprints raises some build quality questions. The rear battery cover squeaks when pressed, the slider sways slightly from side to side and the keypad buttons creak. In addition, the poor placement of the external volume controls towards the bottom left of the handset means it is hard to adjust volume when holding the handset to your ear.

The DualSim Slider forgoes the traditional five-way navigational pad for what the company has dubbed the Magic Touch pad — a touch-sensitive display window with buttons that change depending on which handset functions are being used. For example, when using the camera, digital zoom icons appear, while during general use the Magic Touch pad acts as a regular five-way navigational pad with direction icons and a centre key.

Unfortunately, the implementation of the pad is far from magic, resulting in a frustrating user experience. You need to press the pad with your fingernails for best results, and quickly scrolling through lists or items is nowhere near as fast as it should be. There is an option of adding haptic feedback to the Magic Touch pad, but this seemed to slow down responsiveness even further. A regular five-way navigational pad would have been far better.

The DualSim Slider is a tri-band GSM phone, so there is no 3G or HSDPA support. There is also no e-mail client, so the handset probably won't appeal to businesspeople. With a feature set that is skewed more towards multimedia than business functions, the DualSim Slider should appeal to younger buyers who may have multiple prepaid SIM cards.

Multimedia is fair, with a 2-megapixel camera that doubles as a video recorder, audio and video player applications, an FM radio and a sound recorder. There is also a built-in WAP browser and a microSD card slot for extra storage. DualSim includes a 2GB microSD card in the sales package. Unfortunately the phone employs a proprietary USB charging and headphone jack — so you can't use regular 3.5mm headphones — and there is no A2DP Bluetooth profile.

Other features include SMS and MMS with T9 predictive text input, an 800 contact phonebook, Java games and a range of PIM features such as a calculator, stopwatch, e-book reader, calendar, to-do list, alarm and world clock. Battery life is fair but not great, especially considering this is only a GSM handset. The 850mAh battery has a talk time of up to 200 minutes and a standby time of five days.