Tron: Evolution review: It's not as daft as it looks Tron: Evolution is fan service for ageing geeks. But with Tron: Legacy looking to be a seriously good film, hopefully the game finds a whole new legion of converts.

It's a sad sign that you're getting older when you have fond memories of Tron, but your younger co-workers just give you a blank look at the name.

The very definition of a cult hit, 1982's <i>Tron</i> was a terrible film in just about every way. However, the primitive CGI and stylish iconography have somehow managed to make a mark on cinematic history; so much so, that Disney has seen fit to revive the concept in 2010 with Tron: Legacy.

Accompanying this movie is Tron: Evolution, a tie-in game that will test your ability to remember what Tron is about. We think you'll enjoy it, even in the likely event that it makes absolutely no sense to you. 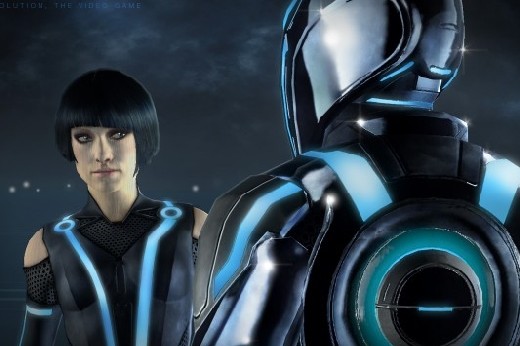 Even the cast looks confused...

See, the game has a terrible plot problem — cut scenes are mere snippets in length, and over before they actually explain anything. There's a lot of name dropping done as well, and the developers have made the horrible mistake of assuming people know the backstory. Of a cult movie from 1982.

So you'll need to re-watch the original film to catch up on the world and characters, and then you're ready to play. And it's at that point that Tron: Legacy gets awesome.

Much like the Prince of Persia games, Tron is a fast and fluid parkour-style platformer, with generous checkpoints so it's not so bad when you take a fall. It's also broken up with some pretty flashy combat.

Of course, unlike fantasy-Persia, Tron is set in a cold and clinical sci-fi universe; like Blade Runner without the Bangkok cool. This kind of minimalist visual style is often boring in the extreme, but in Tron's case it's elegant and uncluttered. Add in a soundtrack by dance geniuses' Daft Punk, and you have a game that, at times, feels more like an interactive music video than anything else. 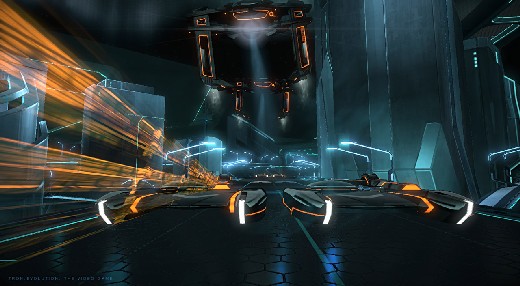 Future-retro is so hot right now.

Progression is very linear, so you'll never get lost in the game. Some would call that restrictive, but in reality it just keeps the amount of downtime you face to a minimum — you rarely stop moving in Tron. You'll get to play with character customisation through a basic 'level-up' system, similar to the online component of the Call of Duty games. As you go on, you do start to feel more powerful, so it's not a completely one-track game, either.

To break up the platforming and fighting, there are also speed bike levels, which are suitably fast and furious, and tank levels, which give you a chance to really unleash hell. There are also boss battles, but they're of the standard "figure out what the weakness is and spam it" variety, so it's probably the least interesting part of the game.

You can play Tron: Evolution online, but the different modes on offer are limited. However, we found that the action itself suits deathmatches well (assuming you can find a match). In a neat twist, the experience you earn online applies to your single player character's progression, and vice versa — a trick reminiscent of Halo: Reach. 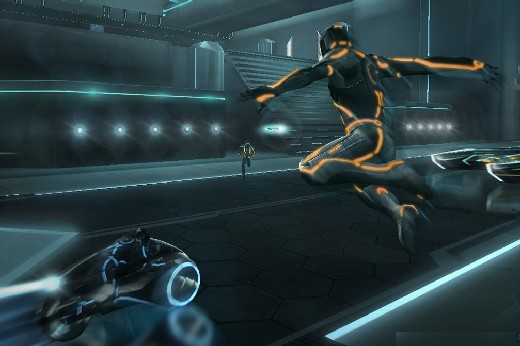 The online mode is surprisingly fun.

Ultimately, Tron: Evolution is going to be for Tron fans, and if there wasn't a blockbuster Hollywood film on the horizon, it wouldn't sell two copies. But if you enjoy the new movie, this is worth a look-in too. As movie tie-ins go, Tron: Evolution is actually one of the best examples in the genre (faint praise, we know).

Between this and Epic Mickey on the Wii, Disney is on serious form this Christmas. Give it a go: you won't be disappointed.