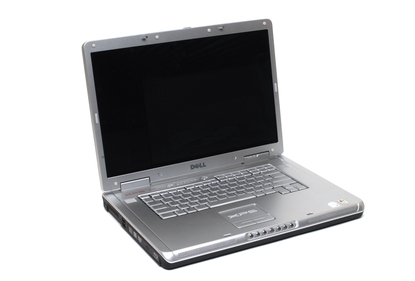 As we've come to expect from the XPS range, the M1710 is one of the most powerful notebooks on the market.

When it comes to Centrino Duo notebooks the Dell XPS M1710 is among the cream of the crop. There's little more any gamer or enthusiast could ask for in a notebook, except perhaps a jet pack or a built in light-sabre.

Inside the glowing silver and red chassis is an Intel 2.33GHz T7600 Core 2 Duo CPU, the top of the line from the Centrino Duo platform, offering a 667MHz front side bus (FSB). Also installed is 2GB of 667MHz DDR2 RAM, a 100GB hard drive and a GeForce Go 7950 GTX graphics card with 512MB of video RAM for the best series 7-based gaming NVIDIA can offer in a notebook.

Also installed on this Windows Vista Ultimate machine is a Blu-ray player which can burn double layer Blu-ray discs; an excellent feature for any computer. To complete the experience is a High Definition 1920 x 1200 resolution screen for full 1080p movies, along with a nice set of speakers. At the time of writing, this iteration of the Dell XPS M1710 held position number one in our benchmark rankings.

In WorldBench 6, an application based test for Windows Vista machines, it scored a total of 81, which is the best score we have currently seen from any notebook. The most notable performance results within the WorldBench 6 test came from the Photoshop test, the DirectX test and a significant improvement in the rendering test over all other notebooks we've looked at recently.

In gaming tests it really showed of its prowess. In 3DMark 2006 at the default settings it scored 5046, indicating a fairly smooth gaming experience on most modern titles. We also cranked up the resolution to the native resolution of 1920 x 1200 at which the XPS M1710 scored 3786; also a reasonable result. Although these don't compare to the power available on desktop machines, for such a portable device it's a great option to take around to a friend's house.

In F.E.A.R's in-game performance test, at a resolution of 1600 x 1200 and using the maximum quality settings, including 4x anti-aliasing and 16xanisotropic filtering it managed an average of 36fps (frames per second). We dropped the resolution down to 1024 x 768 with the same quality settings it managed a much more playable 73fps.

One of the coolest features of this notebook is its Blu-ray player, which can also burn double layer Blu-ray discs. We watched Blu-ray titles and enjoyed the clarity and brightness of the screen. However one flaw with the display that constantly re-appears in Dell XPS notebooks is a noticeable curtain effect. This effect caused vertical bands of brightness and darkness on the screen and is most noticeable when displaying solid uniform colours. Apart from this however the screen is great, projecting a bright image with a broad viewing angle, which makes it far more comfortable to view from a range of different positions.

A notebook of this nature is often considered a desktop replacement and battery life becomes a low priority, however we were quite impressed by the XPS M1710's ability to hold out for 100 minutes during our worst-case scenario battery test, despite its size and high-power requirements. The test is considered a worst case scenario because it uses the optical drive and speakers while also taxing the system's core components.

Aesthetically the XPS is not for the shy or anyone with aversions to LED lighting. The red lights beam from the sides, front and top, not to mention the glaring XPS logo on the touchpad. The keys are comfortable to type on but there is no number-pad. The touchpad is smooth and responsive to use, even if a mouse might be a preferred option for gamers. One the front edge of the chassis are media controls for playback, including volume and mute, forward, back, play/pause and stop buttons. Above the keyboard near the power button is a MediaDirect key which allows you to boot into a media player without having to load all the way into Windows.

The XPS offers Wi-Fi 802.11 a/b/g networking as well as a gigabit Ethernet connection and a 56k modem. A total of six USB 2.0 ports are available and there's also a FireWire and an Express Card slot too. For video output there's a VGA, a DVI and an S-Video port. It also includes a media card reader, which supports SD, MMC, MS, MS-Pro and xD cards.