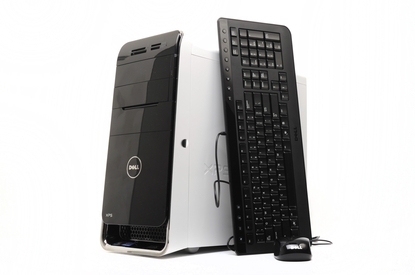 The Dell XPS 8300 offers plenty of performance for users who want to perform multimedia tasks. It's also perfect for heavy multitasking, can be used for a little gaming, and it has a 2TB hard drive. We just wish it came with USB 3.0 and Wi-Fi as standard.

Dell's XPS 8300 desktop PC is available with a Second Generation Intel Core i7 CPU and it can be used for practically any task, except hardcore gaming.

It's a smallish PC that looks good and it doesn't harbour any old-fashioned ports and slots. You won't find VGA or PS/2 ports on it, nor does the motherboard have PCI slots. Instead you get two DVI ports, HDMI and DisplayPort, eight USB 2.0 ports, eSATA and Gigabit Ethernet. The motherboard has only PCIe slots, with two free PCIe x1 slots available for expansion cards. It doesn't have USB 3.0 ports and it doesn't come with a wireless card or a digital TV tuner as standard — if you want Wi-Fi and a TV tuner card, you'll have to add them to the configuration when you order the PC. An 802.11n wireless card only adds $8.50 to the price, but a Happauge hybrid TV tuner adds $119.90.

The XPS 8300 ships in a small case that's around 410mm high, 450mm deep and 190mm wide. That said, it still feels a little chunky due to the design of its front panel, which flares toward the bottom. There are two USB 2.0 ports hidden by a sliding door; two more USB 2.0 ports and audio ports are located at the top of the machine. Furthermore, there is a recessed area in front of the USB ports that can be used to safely rest a phone or MP3 player while it's charging. The location of this area and the USB ports means that the XPS 8300 will be most convenient when situated on the floor rather than on a desk top. The overall size of the XPS 8300 is small, but still a little chunky due to the front panel being thicker at the bottom than at the top.

On the inside, the XPS 8300 is quite cramped. It has a micro ATX motherboard that's decked out with an Intel Core i7-2600 CPU, 8GB of DDR3 SDRAM (using four 2GB modules) and an AMD Radeon HD 5770 graphics card with 1GB of RAM. Storage is handled by a 2TB Seagate Barracuda XT hard drive and you also get a DVD burner. It produced very fast results in our tests: 18sec in the Blender 3D rendering test, 43sec in the iTunes MP3 encoding test and 40min in the DVD transcoding test. You can use the XPS 8300 for many tough tasks, including video editing and video conversion and it's also perfect for multitasking.

The hard drive performance of the XPS 8300 was stellar — it recorded a file transfer rate of 124.7 megabytes per second in our tests. The drive that our test PC used was a 2TB Seagate Barracuda XT, which has a SATA 3.0 (6 gigabits per second) interface and a 7200rpm spin speed. It's a very good transfer rate for a single drive — one of the fastest we've seen — but the more data that gets packed into it, the slower it will become. With 2TB of space available, it could take a while before it gets filled. There is room in the case for one more hard drive, but as the case is cramped and the hard drive bay is mounted sideways, you might have to remove the graphics card and some of the cables that are in the way when installing it. There are four SATA ports on the motherboard and it supports RAID 1 and RAID 0.

The XPS 8300 runs reasonably quietly, even when it's under a heavy load, but it will be noiticeable in a quiet bedroom. It has four fans: the CPU fan, the graphics card fan, a 120mm rear extraction fan, and there is also a fan in its 460W power supply. You'll hear some hard drive noise when the heads are busy reading or writing data.

Dell has installed a few bits of software that aim to make the user experience a little better (Dell Dock), and also to make it easier to get support (Dell Support Centre) and back up data (Dell DataSafe Backup). When you first start using the PC, there are many pop-ups from these applications requesting that they be updated. It's best to do this right away as the constant reminders can be quite frustrating. The Dell Dock sits on the Windows desktop and provides easy access to regularly-used applications and Web site shortcuts. It's not really a necessity, but some users may appreciate it.

For $1499 (without a monitor), the Dell XPS 8300 is a good option for anyone who wants a fast desktop in a reasonably small form factor. The drawbacks are that it can't easily be expanded due to its small case, and it also doesn't have many value-adds — you don't get extras such as USB 3.0, 802.11n Wi-Fi or a digital TV tuner for the price.