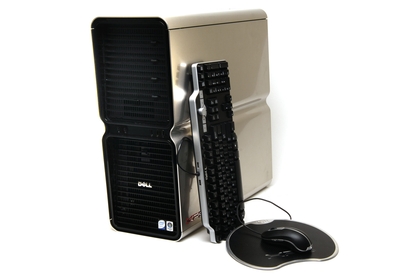 The Dell XPS 720 is a little hard to judge. One can't help but admire the effort Dell has put into its design and construction, yet by the same token, its a little awkward and the construction is excessive. It sure does look good though, so if you're after a machine that will be used for gaming, or even 3-D and video rendering applications, then it's worth considering.

Dell's XPS 720 is aimed primarily at gamers who don't mind having the world's biggest PC in their room. While its configuration can be tailored to suit your needs and budget, the configuration we tested is tame compared to its housing, which stands about 55cm tall, 22cm wide and about 57cm deep. It's quite possibly the suburban Humvee of desktop PCs because of this impractical size.

Our test unit shipped with an Intel Core 2 Quad 6600 CPU, running at 2.4GHz, along with 4GB of DDR2 667MHz RAM and a GeForce 8800 GTX graphics card. Two Western Digital Raptor hard drives were installed in a RAID 0 array, for a total formatted capacity of 298GB; a Serial ATA-based DVD burner was installed, as was a Creative X-Fi sound card.

This configuration produced a competitive score of 109 in WorldBench 6 and its 8800 GTX-based card returned mostly favourable results during our DirectX 10 gaming tests. In fact, it recorded the fastest score we've seen to date in the Call of Juarez test -- 34 frames per second (fps) -- but it averaged only 19fps in the Lost Planet test. However, it will play current DirectX 9-based games very smoothly at high resolution and detail settings. This is just as well; the monitor options for this system, when going through the ordering process, start at 24in, move to 27in (both with a native resolution of 1920x1200) and end at 30in (with a native resolution of 2560x1600). We had no problems playing FEAR at a resolution of 2048x1536 with 4x antialiasing and 16x anisotropic filtering enabled -- it scored 117fps in this test.

Additionally, because the XPS 720 is based on NVIDIA's nForce 680i SLI chipset, it can support a second graphics card in SLI mode (you wouldn't think so by looking at the layout of the motherboard, as the two graphics cards end up with barely any clearance between them). But, Dell says it will only support two mid-range cards (8600GTS), and not two high-end cards, as the power supply isn't strong enough to handle them. Therefore, a single GeForce 8800 Ultra is the most graphics power that can be packed into this system.

The motherboard is based on the BTX form factor, so it's installed on the left-hand side of the case, rather than the right-hand side (when looking at the case from the front). It's a large motherboard by any standard, yet it's not gluttonous. It has six SATA II ports, eight ready-to-use USB 2.0 ports (two at the front of the case), two FireWire ports (one at the front) and one gigabit Ethernet port.

All around the motherboard, structural supports abound for the add-in cards and the cooling fans -- and there are lot of cooling fans in the case. Two 12cm fans at the front of the case push cool air through the large CPU heat sink and the graphics card, respectively, towards the rear of the case, while an 8cm fan is positioned in between the two hard drives cages at the top. Almost all of the front and rear of the case is vented, so there is no shortage of fresh air, but dust filters aren't installed. Because the case is a little fiddly to work on (the hard drives are at the top, behind the DVD burner) Dell has included pre-routed cables for all of the available drive ports. This means if you want to install another hard drive, all you have to do is plug in the power and data cables that are already hanging from the empty drive cage. It makes the case look messy, but then again, it's not like it has a windowed side-panel. Tools aren't required when installing a new component either, as everything is held in place by clips and brackets.

You might want to opt for a third hard drive when configuring this system, as the two 160GB Raptor drives will fill up fast, and you'll also want something to back them up. During our tests, the Raptors produced a transfer rate of 61MBps, which is a slightly faster result than we were expecting. They do make a fair bit of noise, however, and this is noticeable due to the size of the case and its vents. The fans, however, are mostly quiet except during boot-up.