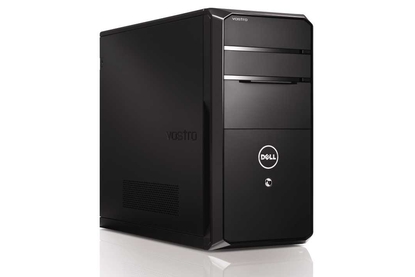 Dell's Vostro 460 business PC brings the latest suite of Intel technology to businesses in the form of the Sandy Bridge processing architecture. We're looking forward to putting it through its paces.

Dell's Vostro 460 is the first small business desktop PC to use the latest Intel 'Sandy Bridge' quad-core Core i5 and Core i7 processors, according to the company. This should mean that this desktop PC has more than enough power to handle business multitasking.

It's possible to spec the Dell Vostro 460 with one of two different Intel Core i5 processors, or with a quad-core Intel Core i7 processor. Up to 16GB of RAM can be included in the build, as well as up to 2.5TB of storage spread over two hard drives. It's also possible to specify a Blu-ray disc drive, two monitors and a range of ATI or NVIDIA graphics cards.

The cheapest specification of the Dell Vostro 460 business desktop PC is $1299, and the top-spec Intel Core i7 machine with 8GB of RAM and a 1TB HDD is $1699. These prices aren't too far off what competitors were charging for Core i5 workstations at the end of 2010, so we're keen what kind of performance the Dell Vostro 460 delivers.