The Dell Vostro 3550 is a great 15.6in business laptop. It comes with a Sandy Bridge-based Core i7 CPU, which gives it great performance, and it also offers long battery life.

The Dell Vostro 3550 is a 15.6in, 2.7kg business notebook with a swag of great features. The standout of these features is Intel's 2nd Generation Core i7 CPU, which gives the Vostro 3550 plenty of speed and, in conjunction with a 9-cell battery, a very long life away from a power outlet. It's also blessed with a comfortable backlit keyboard, USB 3.0 ports and a massive touchpad.

See our Dell buying guide: Which Dell notebook is right for me?

Indeed, there's a lot to like about the Vostro 3550, and it all starts under the hood. The 2nd generation Intel Core i7-2620M CPU runs at 2.7GHz and has two cores and Hyper-Threading, along with a Turbo Boost speed of 3.4GHz. It also features integrated Intel HD Graphics 3000, which are powerful enough for a business user in their own right, but Dell has nevertheless included a separate AMD Radeon HD 6630M graphics adapter, which offers even more grunt. The rest of the configuration is made up of 4GB of DDR3 SDRAM and a 500GB, 7200rpm hard drive.

The Vostro performed well in our Blender 3D rendering and iTunes MP3 encoding tests, recording times of 37sec and 44sec in these tests, respectively. Additionally, it recorded a time of only 51min in our video transcoding test, where we convert a DVD file into a 1.5GB Xvid file. All of these results are among the fastest we've seen from a notebook to date and it just goes to show how much power the little Sandy Bridge CPU possesses. Not only that, it runs very cool; you can use the Vostro on your lap for prolonged periods of time without feeling the heat unless you are performing tasks that make the hard drive and AMD graphics adapter work hard.

In 3DMark06, the integrated Sandy Bridge graphics recorded a very good mark of 4389. This is more than enough grunt for everyday office applications and also for editing photos and some gaming. Switching to the AMD Radeon HD 6630M adapter bumped the 3DMark06 score up to 7510, which means you definitely can use the Vostro 3550 to play games in your downtime. The system automatically selects which graphics adapter to use depending on the application, but you can also customise the graphics profile to allow applications to run with your preferred adapter. If an application doesn't have an adapter assigned to it already, a pop-up is displayed so that you can select the appropriate adapter.

Using the default Sandy Bridge graphics, our battery rundown test lasted 5hr 5min. This is as long as we've seen a 15.6in notebook last in our rundown test, in which we disable power management, enable Wi-Fi, maximise screen brightness and loop an Xvid-encoded video; it's longer than the time recorded by the MSI CR640 notebook that we recently reviewed, and this is due to the larger battery in the Vostro. The 9-cell battery sticks out of the back of the unit, not only giving the notebook a long life away from an outlet, but also a convenient gripping point for carrying the notebook. You will be able to get more than 5hr 5min of battery life if you just use it for basic tasks and also employ a power management strategy and lower the screen brightness.

Physically, the Vostro 5530 is a delight in minimalist design. It's not overloaded with ports and shortcut buttons, and the only piece of flair comes from the chrome trim around the large touchpad and the keyboard. The chassis feels solid, and the screen is held in place by strong hinges. We love the touchpad, which is 100x57mm and has soft buttons. The keyboard, too, has soft buttons that don't require too much effort to press and they have a rounded design that feels comfortable and looks good. The keys look even better when they are lit up! You can enable the keyboard's backlight by pressing the Fn-F6 key combination, and you can select from two brightness levels.

There are three one-touch shortcut keys above the keyboard: one brings up the Windows Mobility Centre, through which you can change most of the laptop's settings (including the keyboard light); another key brings up the Dell Support Centre, through which you can update drivers and back up data; and the final key is the Dell Instant Launch Manager, which lets you assign your own application.

The screen is a standard 1366x768-resolution, 15.6in panel. It has a matte finish so you don't have to worry about reflections while you use the laptop in a bright area. Its brightness and contrast are adequate, but its vertical viewing angles, like most laptop screens, are narrow. 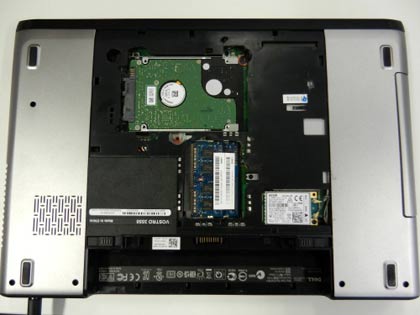 The internal layout of the Vostro 3550.

Around the edges, the Vostro 5530 has a lot of useful features: a DVD burner, an ExpressCard/34 slot, an SD card slot, microphone and headphone ports, four USB ports (one of which doubles as an eSATA port and two which support USB 3.0), Gigabit Ethernet, VGA, and HDMI. You also get a webcam, Bluetooth and 802.11n Wi-Fi. A fingerprint reader is located on the palmrest, just under the right side of the keyboard, and it can be used to log in to the system and also to serve as a substitute for typing in a password when accessing your favourite Web sites (passwords can be stored in the DigitalPersona Fingerprint software).

Our review unit also came with a built-in, unlocked 3G module, but Dell informed us that this won't be offered right away for the Vostro 3550, but that it may be included at a later date.

It's hard not to like the Vostro 3550; it looks good and feels comfortable to use. We like its backlit keyboard and huge touchpad, and it has a useful array of ports along its edges. Best of all, it has fast performance and long battery life thanks to the Sandy Bridge Core i7 CPU and 9-cell battery.