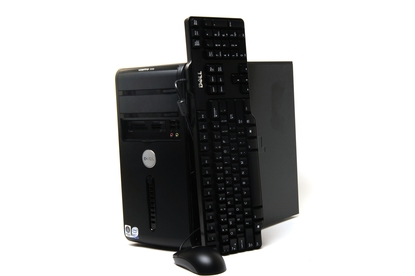 In many respects the Vostro, though aimed at small businesses, is just another PC. However the layout, safety features and included maintenance tools and services make this a promising choice for businesses searching for a no-fuss solution.

Through the revival of a long dead language, Dell has breathed a touch of new life into its small business product line with the launch of Vostro (translated from Latin as "yours"). Vostro is apparently the result of a series of global surveys of small businesses and is a product adapted to suite their needs. Although Vostro seems to be more focused as a service-set than a hardware overhaul our Vostro 200 desktop PC performed reasonably well and we're a fan of some of the features they've added, as well as some of the things they've removed.

Before even delving into the hardware it's a pleasure to point out that Dell has removed all trial-ware from the Vostro range. It may seem odd to some that it took a global survey to figure out how irritating the pre-installed "bloat-ware" is, but the point got across regardless, which is a good start.

Beyond the cleaner install, the Vostro range offers a number of improved phone and after sales services, and is installed with a few tools to make life easier and reduce time wasted maintaining your computer. These include the Dell PC Tune-Up software with a range of automated tasks built into it. Tune-Up will defragment your hard drive, check disk space and install necessary security updates based on a programmed schedule of your choice. Unfortunately the Tune-Up is not currently publicly available but will be downloadable for Vostra customers later in the year.

Also included in the package is the Dell Network Assistant, designed to make network setup and management faster and easier. Dell's claim that you can have your network set up in six clicks may be reminiscent of the ever shorter abdominal workout videos advertised on late night television, but if it truly saves time then it's a bonus.

Although the focus of Vostro is on the service, support and functionality there's, still some decent hardware installed and it performed comfortably through our benchmarks. The system is built on Windows Vista Business edition and is powered by an Intel Core 2 Duo E6320 1.86GHz CPU, 2GB of DDR2 RAM and has an ATI Radeon X1300PRO graphics card for good measure.

The two 250GB hard drives are set up in a RAID 1 array, which mirrors the data on one hard drive to the other, as a permanent real-time backup of everything. This is a good security measure in the event of a catastrophic hard drive malfunction, ensuring you have a safe copy of your data right there within the same computer. The only catch is that Dell has filled the only hard drive bays, so further internal storage upgrades won't be possible.

In our benchmarks the Dell scored as we'd expected, which is well enough for your average business tasks and maybe a little more. In WorldBench 6 is scored a total of 84, which gives it plenty of grunt to handle programs ranging from Adobe Photoshop to Microsoft Office. We also put the CPU to the test by encoding 53 minutes worth of WAV files to MP3 files. Using two separate applications, Cdex, which is single-threaded and iTunes which is multithreaded we tested the ability of the Vostro 200 to encode at different compression rates. In Cdex, encoding to 192Kbps MP3s, it took the Vostro 200 144 seconds to encode the WAV files, while in iTunes, at a higher compression of 56Kbps it took just 89 seconds.

The Vostro has a nice convenient layout with easy access to four USB 2.0 ports on the front panel, as well has audio jacks and a media card reader supporting a range of cards including SD, xD, MMC, CF, MD, MS and MS-Pro. A DVD re-writer is also accessible via the front panel. Further connectivity is available at the back, including a 10/100 ethernet port, four more USB ports and a pair of FireWire ports. Dell has also installed a 56k modem.

The system is fairly quiet during operation and the black mid-tower case is both stylish and inconspicuous.