This 15.4in Dell laptop has built-in 3G connectivity 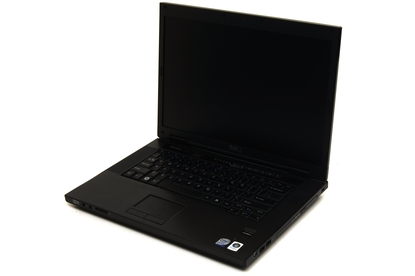 Dell's Vostro 1520 is a 15.4in notebook with a 9-cell battery, yet it weighs a reasonable 2.7kg. With a built-in 3G modem and a powerful CPU, it's a great workhorse for the business user who wants a mid-sized notebook that's comfortable to work on.

The Dell Vostro 1520 is a 15.4in notebook that can be described as a workhorse. It's primarily aimed at business users, so it doesn't have a lot of fancy ports such as HDMI and eSATA, but it does have lots of network connectivity options.

Not only does this laptop offer Gigabit Ethernet, 802.11a/g/n dual-band wireless networking (Intel WiFi Link 5300) and Bluetooth, you also get a built-in 3G modem (Dell Wireless 5530 HSPA Mobile Broadband Minicard Modem) and SIM card reader. The SIM card reader is located in the battery compartment and according to Dell it is unlocked, so it can be used with the provider of your choice. However, Dell only provides official support for Vodafone accounts. Unfortunately, we didn't have much luck getting a connection. The Vostro 1520 recognised SIM cards from Vodafone and Telstra, and gave us the option to choose a preferred network from those carriers, but it failed to actually make a connection despite multiple attempts.

Under the hood, the Dell Vostro 1520 has an Intel Core 2 Duo P8600 CPU, which runs at 2.4GHz. It supplies enough grunt for everyday office applications. This was shown in our WorldBench 6 benchmark where it scored 96, which is almost as good as a laptop with a 2.53GHz CPU. It's also powerful enough to run 3D rendering programs (it recorded a relatively zippy 1min 15sec in Blender 3D) as well as encoding tasks (it took 1min 10sec to encode 53min worth of WAV files to 192Kbps MP3s in iTunes). You also get 2GB of DDR2 RAM, integrated NVIDIA GeForce 9300M GS graphics and a 250GB, 5400rpm hard drive (Seagate ST9250424ASG). The hard drive can be encrypted with the supplied software from EMBASSY systems, which works in conjunction with the trusted platform module (TPM) in the BIOS (this feature can also be found in the Dell Vostro 1720).

The screen has a native resolution of 1280x800, so icons and text appears large on the screen, and it doesn't have a glossy coating, which means it will be easy to read in a well-lit office. The vertical viewing angle of the screen is a little narrow: the screen can look either too pale or too dark depending on the angle and how you are sitting.

Despite being a business notebook, multimedia features haven't been omitted; you still get media player buttons across the top of the keyboard. They're touch buttons, but we found that the volume controls required pressure to activate. There are speakers either side of the keyboard. Although they aren't powerful, they are useful for watching videos and casual music listening.

The keyboard has full-sized keys and feels good to type on for the most part, but the keys could use a little less resistance. The touchpad is large and responsive, but it comes with 'drag lock' enabled, which can be annoying during drag-and-drop operations and when browsing the Web. It can be disabled through the Dell Touchpad Settings in the Mouse applet in the Control Panel.

Taking the Dell Vostro 1520 out on the road isn't difficult. It weighs 2.7kg, which is reasonable for a 15.4in notebook with a 9-cell battery, and it has dimensions of approximately 358x280x45mm (WxDxH). Its battery lasted 3hr 25min in our video rundown test, which we conduct with the screen brightness all the way up and the wireless radio enabled. It's a good result for a 15.4in laptop such as this one.

The notebook feels quite solid and its underside doesn't get too warm even after it has been running for a few hours; some heat does travel up through the palm rest. The screen's hinges are stiff and hold the LCD panel firmly in place at your desired angle. The bezel is 1cm on the thick left and right edges, but 2.4cm thick at the top in order to accommodate the webcam and the antennas from the wireless networking, Bluetooth and 3G modules.

The Vostro 1520 lacks niceties such as a keyboard light or Sleep-and-Charge USB ports, and it also doesn't have HDMI or eSATA ports, but it does have FireWire, four USB 2.0 ports, an ExpressCard/54 slot, a fingerprint reader and good networking features. These features, along with its good battery life and reasonable weight, can be bought for a competitive price of $2048.