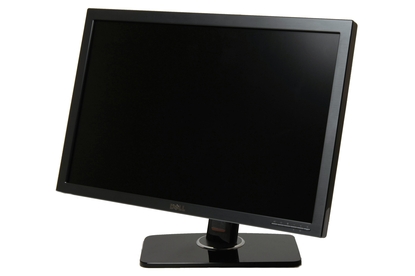 It's big, but it's also one of the best performing monitors we've seen. Its colours and clarity are sublime, and it can be viewed from extreme wide angles almost perfectly!

No detail is lost on this behemoth of a monitor, which measures in at 30in and sports a native resolution of 2560x1600 with a widescreen aspect ratio of 16:10. Its large viewing area makes it perfect for multitasking, while the quality of the screen itself is perfect for serious photographers and graphic designers alike.

Its colour reproduction was accurate and natural, while its contrast and brightness levels were spot on from the outset. We didn't even have to touch the controls during our calibration session and this transcended to our photo tests where dark areas of photos, as well as gradations, were rendered without any loss of detail or colour banding. Skin tones looked natural and minute details weren't drowned out in images featuring feathers and furs.

With monitors as large as this one, getting enough light to illuminate the entire area of the screen can be a problem, and often leads to some corners or edges looking darker or brighter than others. However, this screen had no such issues. Its uniformity -- top to bottom, left to right -- is excellent, as are its viewable angles.

There was no noticeable shift in colour when viewing from the sides, only a very slight loss of contrast. You can sit pretty much anywhere in front of this monitor and still view its content almost perfectly. Text was sharp, lines and curves were smooth and letters in Windows Vista displayed no more purple fringing than we are used to seeing.

In DisplayMate, the monitor's luminance proved to be excellent. In the Extreme Greyscale test, all light-grey colours were visible on a white background, and all dark-grey colours were visible on a black background. Its black level was dark and didn't suffer from any paleness or hints of grey. Only slight noise was noticeable in some of the colour tests, but it wasn't a concern, while colour scales were reproduced with distinct intensity changes between each level. Vibrant reds, greens and blues were produced at the bright end of the scale, yet more natural tones appeared at the middle and darker end of the scale. Grey tones showed no hints of discolouration.

In the on-screen display program, there are plenty of options for tweaking the picture if it's not to your liking. As well as contrast and brightness changes, the gamma and sharpness can be changed, and dynamic contrast settings can also be applied. Additionally, pre-set colour profiles can be set according to the task at hand, whether it be watching video or working on graphics.

The screen's large native resolution is more than enough to display high-definition video content, and it also scales down nicely. Its quality was more than acceptable at 1920x1200, although at this resolution the picture will look a little soft if you sit very close to the screen.

The monitor wasn't able to properly scale DVDs up to its native 2560x1600 resolution. Playback suffered from tearing and stuttering. We had to enable our NVIDIA GeForce 8800GT graphics card's scaling function in order to watch DVDs smoothly in full-screen mode. You probably won't want to watch DVDs at that resolution anyway, as blotchy colour and image noise was immediately evident during our tests.

Motion blur was only a slight problem while quickly scrolling through documents, but wasn't overtly noticeable during gaming sessions.

But while the image quality of this monitor is superb, so too is its design. It has no less than eight connectivity options, so you can plug in multiple devices and switch between them at your leisure. Among the options are analogue D-Sub, component, S-Video and composite ports, while digital connections are facilitated by two DVI-D ports, HDMI and DisplayPort ports. A split-screen mode can be invoked if you have multiple devices plugged into the monitor, which will let you view the input from two ports simultaneously, side-by-side. It doesn't work too well if one input is the PC screen, as text will be too small to read, but it's useful for video feeds.

And the ports don't end there. A couple of USB ports are splashed underneath the rear panel of the screen, which can be useful for connecting a printer and external drives. Meanwhile, on the left-hand side of the unit, there is a memory card reader for SD/xD/MS/MMC and CompactFlash formats, as well as two more USB ports. They worked perfectly in our tests, and they're easily accessible thanks to the swivel-capable stand.

Indeed, the monitor's stand can swivel, tilt, rise and fall, so it's quite adjustable, and its glossy finish contrasts well with the brushed metal finish of the bezel. The only problem with the stand is that it has a thin, single mounting point and the screen is therefore prone to wobbling if it or the table it's on is bumped.

All up, if you want a huge monitor for photo editing and comfortable multitasking, as well as something to use for high-definition movies and video games, you probably won't find a better quality screen anywhere.