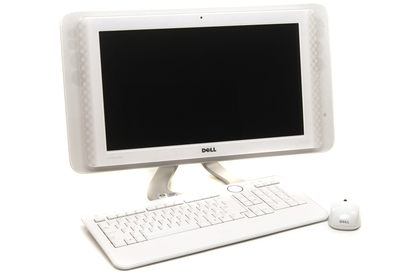 Dell's Studio One 19 is a neat all-in-one PC that is perfect for families. The kids will love its included touch-screen applications, but it can be used for more advanced pursuits, too, such as photo editing, video editing and media encoding.

Dell's Studio One 19 is an all-in-one touch-screen PC that's designed for family use. It's a fast PC that's suitable for everyday work such as Web browsing, editing photos and creating documents, and it can be used for taxing tasks such video editing and file encoding.

Because the PC components are built in to the monitor, the Studio One 19 will save plenty of space on a desk. It has a curved metal stand that is already attached when you buy it, so you don't have to assemble anything once you remove the PC from its packaging. In fact, it's a very easy PC to set up — all you have to do is plug in the power cord. The keyboard and mouse are cordless and they work as soon as you power up. If you still think you might need assistance in setting it up, Dell offers free on-site service by Gizmo (as long as the service is available in your area).

The screen is 18.4in and has a 16:9 widescreen aspect ratio. This is relatively small compared to the current sweet spot for monitors — 22in — but it is a touch screen. It has a resolution of 1366x768 and Dell has enabled a desktop theme with slightly larger than usual text that allows you to easily use your finger to navigate Windows and interact with programs.

Unfortunately, Dell doesn't supply a dedicated touch interface for viewing photos and playing music (unlike HP, which includes the TouchSmart interface with its touch screen PCs). However, it does include a couple of applications that the kids are sure to get a kick out of.

The first is Dell TouchCam, which is a webcam utility that lets you paint over the video that is being captured. This can be recorded and uploaded to YouTube. 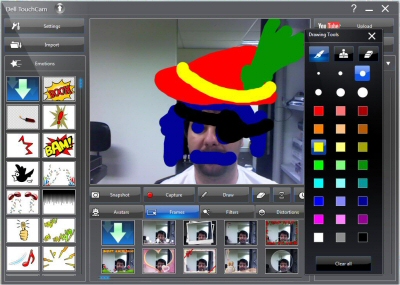 Dell's Touch Cam software is sure to be loads of fun for kids.

The second application is called You Paint and, as its name suggests, it's a painting program. It's optimised for use with the touch screen; you can select colours and painting implements with your finger to create your masterpiece. Parents will love it: it lets kids (virtually) finger paint but there'll be no need to clean up after them. Furthermore, the screen is tough enough to withstand determined prodding from young children. 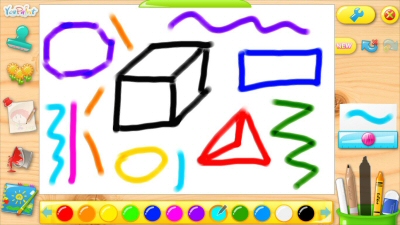 Kids will love the ability to virtually finger paint using the You Paint application.

We didn't experience any problems with the accuracy of the screen and we didn't have to calibrate it before we used it. It's a multi-input screen, which means you can use two fingers to perform gestures; for example, you can pinch the screen to zoom in on photos, and you can flick the screen to go back and forward in a Web browser.

The screen is very bright and has good contrast. Even though it has a glossy finish, it doesn't suffer much from reflections.

We're not big on the design and white colour of the Studio One 19. The speakers next to the screen each have a grille with a pin-hole pattern. A transparent acrylic frame surrounds the screen and slightly overlays each grille's pattern. The frame and the speaker grilles combine to produce a very distracting moiré pattern, which was noticeable when we sat in front of the PC for long periods of time. Some of the people we showed it to said it made them dizzy. As such, we'd recommend not going for the white version of the Studio One 19 — go for the dark blue version and the effect from the pattern won't be as pronounced.

If dizziness isn't enough, playing music through the Studio One 19 will probably leave you with a headache, too. We found the sound to be too widely spaced, with music sounding like it was coming from different directions. It sounded like a 3D or virtual surround sound effect was enabled, but all the filters and the equaliser were disabled in the audio driver. We'd recommend plugging in some speakers if you want to get the best sound out of the Studio One 19.

The majority of the Studio One 19's ports are on the rear; they include four USB 2.0 ports, audio out, and Ethernet. The right side has the slot for the DVD burner, while the left side has two more USB 2.0 ports, an SD card slot, as well headphone and microphone jacks. The power button is also located on the left side; we'd prefer it to be on the front.

This is a solid configuration that produced speedy results in our tests. It scored 100 in WorldBench 6, which is approximately 19 points shy of what a PC with a latest-generation CPU, such as an Intel Core i5, can achieve. This means that multitasking will be brisk, and it will run most applications without any sluggishness, including Adobe Photoshop. It's powerful enough to undertake more taxing tasks, too, such as media encoding and 3D rendering. In Blender 3D it recorded a time of 1min, and in iTunes it recorded an MP3 encoding time of 57sec — not too bad at all for an all-in-one PC!

Its graphics performance is slow (it scored 1524 in 3DMark06) so you won't be able to play any of the latest games on it, but that's not what the Studio One 19 is designed for. If you want a gaming machine, you'll need to buy something with a much better graphics card.

The performance of the Dell Studio One 19 is good, and we like its space-saving design. Its touch screen gives you a new way to navigate the system and browse the Web. The only real downsides are the design of its bezel, its white case and its poor quality audio. In saying that, you can opt for a darker colour and also plug in a set of decent speakers. It's ideal as a family PC, and it is especially suited to young kids. It can be used for creating documents, editing images and browsing the Web, and it will even perform well when you want to edit video or convert media files.